I must admit I didn’t expect to be enthralled by Northern Lights, The Graphic Novel, volume two (what happened to volume one?), by Philip Pullman. Also by Stéphane Melchior and Clément Oubrerie, who have adapted and illustrated, respectively. And finally Philip Pullman again, and Annie Eaton, who have translated it back from the French.

I did like it. Happily I know the story well, so starting on volume two was no disaster. The graphics are great, especially scenery such as the north where Lyra meets Iorek, and the hauntingly beautiful but scary setting of Bolvangar. It is quite illuminating being able to see the characters with their daemons. It sort of brings home the closeness in a way the book didn’t, nor the film. 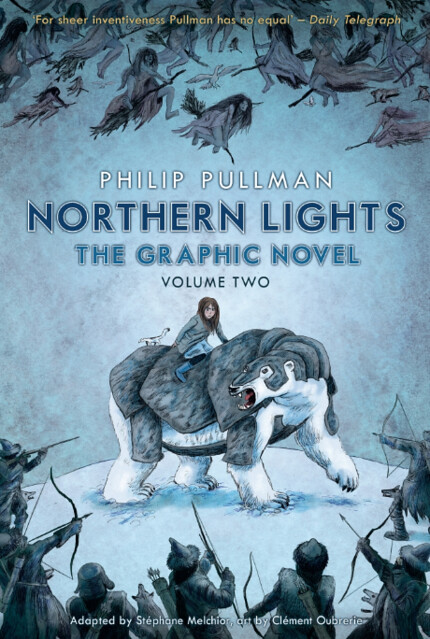 Otherwise it is rather like a film adaptation of a book in that the book is so long and you have to cut and edit to make sense in a smaller format. To some extent it suffers, as all such adaptations do, but it also gains something, and I guess that a graphic novel like this will make His Dark Materials more accessible to less confident readers. As in films, I was surprised by how the characters look, as this is different from how they are in my mind.

But yes, here we meet Lyra and the others as they arrive in Trollesund, and we stay with them until they fly off in Lee Scoresby’s balloon. The harrowing scene showing poor little Tim with his fish replacement for his lost daemon is still as upsetting. Lyra’s spirits are there for all to see, and we are more aware of how angry and scary Iorek was when Lyra first encountered him.

Knowing little about the background to this graphic novel, I assume Stéphane and Clément are fans, like so many others, and that this is why they have begun such a mammoth task. That’s the kind of spirit I approve of!

2 responses to “The graphic Northern Lights”