Geriväg, his name was. Clear-Orf, to you English language readers. I always used to wonder what the original name might be, since at the time I read Enid Blyton’s books I didn’t know enough English to even begin guessing.

I’ve long been confused about the name of the series of books as well. (You’ll find I’m confused about quite a lot.) The Find-Outers seems to be the answer, except when I look at the book titles they are all The Mystery of… and that’s presumably why we called them Mysterie-böckerna in Sweden. 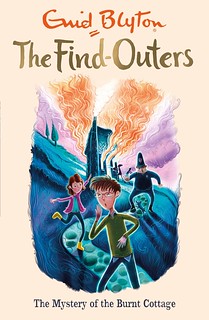 About the only thing I have really remembered all these years is the name Fatty for one of the characters. It wasn’t as unkind as it might seem. First, Fatty himself appears not to have minded too much. (Unless he did, weeping in secret every time the other children referred to him as Fatty.) Second, I didn’t speak English, so to me it was just a name. I understood it was a nickname, and there could even have been a footnote of sorts to explain what it meant. But the name wasn’t translated into anything like Tjockis. And I obviously mispronounced it.

So that’s all right…

Now he’s back, along with Larry and Daisy, Pip and Bets. Plus the charming Clear-Orf. And there are mysteries. I have in my hand The Mystery of the Burnt Cottage, and even though the years have passed, I do feel some of the old Blyton thrill when holding it, and checking out how clever and polite the children are. (I used to believe this was an English thing. Apart from calling your friend Fatty, then.)

I hope a new generation of readers will discover Blyton, for better or for worse. The cover illustration is up-to-date in a way I don’t care for, but I suppose that’s what modern children require. I prefer retro.