The second instalment in Sarah Govett’s trilogy set in a future Territory is as great as the first. With all my newfound fears regarding dystopias, I worried that Escape wouldn’t be able to grab me. For one, I felt the premise that two of the – teen – main characters would willingly attempt to enter the dreadful place where others are sent to die, in order to rescue the third main character, was a bit much. I mean, how could they, and surely there couldn’t be a happily ever after even if they did?

But, the story drags you in before you know where you are. Which is the Wetlands, since you ask.

You know that something will go wrong, and something else will – hopefully – go right, but my first theory proved incorrect. Which is good, because it wasn’t a terribly good one.

Noa and Raf seem pretty naïve in their planning to go after Jack, but by sheer determination these two get further than you’d think. And that’s when things don’t happen as expected, for anyone. 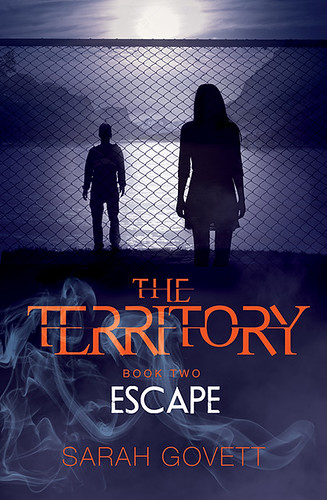 This is exciting and inspiring, but – given our current circumstances – worrying nevertheless. I’m glad there are characters out there, in fiction, doing what many of us would never dream of attempting, let alone be successful at.

The way the book ends, I can see what they must try and do, but I can’t see how they will be able to make it happen. As it’s fiction, I imagine it will work, somehow, and not quite everyone will die trying.

So, not just ‘another flooded dystopian romance.’ And I suppose knowing what moss or seaweed you can or can’t eat will come in handy one day.

This entry was posted in Authors, Books, Reading, Review and tagged Sarah Govett. Bookmark the permalink.