Occasionally I feel a little threadbear myself, not to mention washed out. But I’ve never featured in a Mick Inkpen book.

Here, 25 years on from his first appearance, we have Threadbear again, the slightly worn bear with no squeak. It is very sad. I’m not sure who is saddest, Threadbear himself for not squeaking, or his owner Ben who keeps squeezing and thumping and doing all sorts just to get a noise out of his bear. 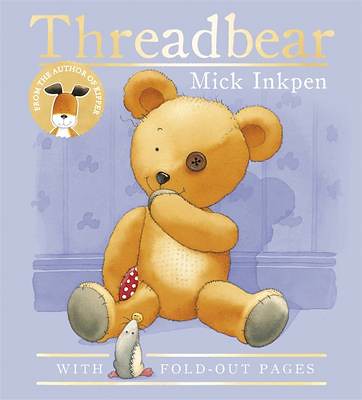 It’s probably Threadbear, because who wants to be a disappointment, let alone fail in what their purpose in life is? He has the squeaker; it just doesn’t squeak.

And then, it is Christmas, and that jolly fat man in red rides past. And Threadbear is suddenly full of hope. But still no squeak.

Don’t give up on the man in red’s powers just yet. You might get that lovely shrunken feeling.