Even Queens can encounter problems when it comes to buying Christmas presents for their little ones. 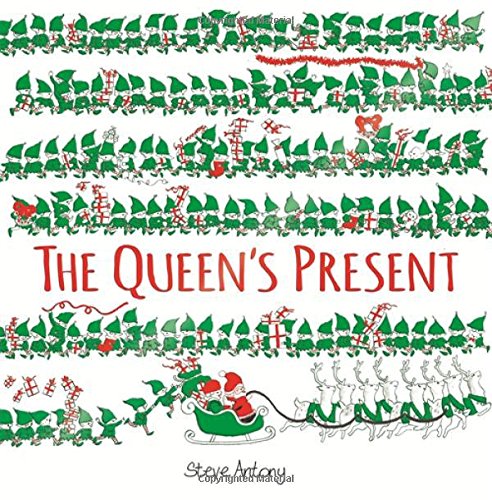 In Steve Antony’s latest picture book, his very active Queen embarks on some serious world travelling to find the perfect gifts for the Prince and the Princess. She has some help from the man in red, who just happens to call in at Buckingham Palace, and who lets her come with him as he crosses the globe.

This way the reader can see many of the world’s most famous landmarks as the Queen and Father Christmas fly past. But no matter how grand the place, it seems she will never find the right thing.

If you look carefully, you will see that Her Majesty starts her travels sitting at the back of the sleigh. But as they go, she ends up closer and closer to the front, until she finally has the reins in her hands.

That doesn’t help, though, and she has to give up the hunt, and Father Christmas sends her on her way in the same manner he himself enters most houses. Hence the Queen’s sooty appearance at Sandringham, where the Prince and Princess get the best gift from Grandma.

(I’m still pondering whether a generation has been lost, or if Steve is merely ‘Grandma-ing’ the Queen for the sake of simplicity?)

One response to “The Queen’s Present”