Or, to make proper use of alliteration, Horrid Henry’s Crafty Christmas. It’s a book about things ‘to make and do.’ So I don’t think it’s actually by Francesca Simon, it is about her creation Henry, and features ideas for what to do at Christmas.

At any time of the year, if you’re feeling Henry-ish.

It is filled with ‘boredom-banishing stuff’ and when mentioned at the same time as Horrid Henry, it rather fills me with dread. Like, what will he be getting up to next? 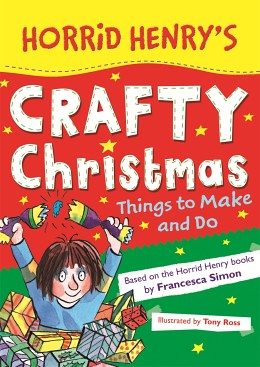 But it is – probably – totally innocent. Scissors, hole punches, sticky tape; what could possibly go wrong? There is baking and slime and rude crackers. Sorry, Rude Ralph’s Christmas Crackers. Occasionally it says to ask an adult to help with certain parts of the crafty doings. Well, do you really think Henry’s friends will give up the separating of eggs to someone else?

So have some horrid fun! And don’t blame me.