It’s probably a fair assumption to make that most Swedes would like to live in Carl Larsson’s home. And of those who don’t, quite a few might not actively object if they ended up there.

I have friends who used to live next door to Carl Larsson’s home, and it was they who gave me this book, by Torsten Gunnarsson and Ulla Eliasson, about his house for my birthday this year. 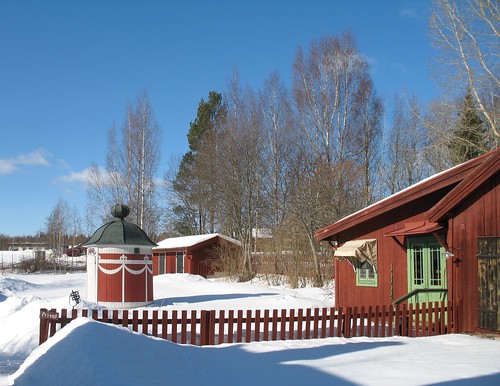 In a way Swedes don’t need books like these; we seem to be sufficiently familiar with Carl’s home anyway. But the pictures are nice to look at, both the photos of the house and the paintings by Carl. And looking at them we see not only a home that would still be just about perfect to move into, despite it now being more than a hundred years later, but it looks pretty much like some house many of us have known at some point in our lives.

It makes me think of my grandfather’s house, which was nowhere near as big or fancy, and it was more recent, but there is still that Larsson vibe in my memories.

Swedes know the house from countless postcards and Christmas cards, not to mention Christmas wrapping paper. We have all torn pictures of the garden or the Larsson family in our eagerness to see what’s inside our parcel.

At some point I talked to Nick Sharratt about this. Maybe when he heard where I come from, he told me about having slept in Carl’s bed. It appears visiting artists can do that, under some circumstances. When I heard about it I felt this seemed quite reasonable. But I understand the bed was short. Nick isn’t. Oh, well.

The bed is in the book (and somehow I can’t stop wondering what the guest artist does when visitors who’ve paid to see the house turn up.)

As I said, Carl Larsson’s style is never wrong. Except it wasn’t his, but his wife’s. She did all the work, and we still know it by Carl’s name.