‘Just to be safe, don’t touch the tree lights,’ said Uncle. ‘I had to cobble something together to make them work.’

Mother-of-witch and I spent Christmas 1980 (I think) with her brother and sister, i.e. Uncle and Favourite Aunt, in the latter’s home. She’d not hosted Christmas for years and the lights had not been out for a few decades. Hence Uncle’s making the best of things.

We wanted to keep things simple, now that even the child (that’s me) was an adult, so had agreed to give each of the other three a gift costing no more than the equivalent of £1. I can’t for the life of me remember what I got anyone, nor what Mother-of-witch came up with.

But Uncle gave us each an ugly brown cardboard magazine folder box thing. I used mine for years and it only died a death of mould about ten years ago, in a Stockport cellar. I always suspected he might have ‘found’ them at the office.

And Favourite Aunt gave the three of us a small bound notebook. Stationery in Sweden has always been pricey, and certain things you just didn’t buy if you were poor, or sensible. Which explains my pleasure in receiving this tiny black notebook, complete with red spine and corners. 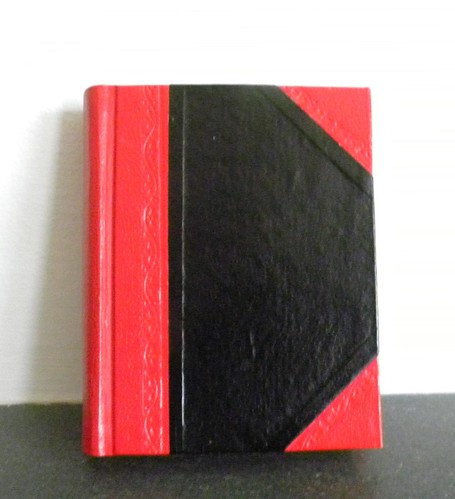 I know. It’s nothing special, and I have a feeling it was Made in China. But I loved it! I was going to keep it and write something important in it, and not waste it on everyday notes.

But you’ve guessed it; I have yet to write a single word in the book. I get it out every now and then, thinking I’ll use it. And then I don’t.

It did fulfil the criteria well, though. It was a small, cheap-ish present. And it’s one I remember better than most other gifts I’ve ever received. Besides, lots of other treasures I have already parted with, during one of many clear-outs.

The notebook is still here.

This entry was posted in Blogs, Christmas. Bookmark the permalink.

3 responses to “The cheap gift”