Easier said than done, this being brave stuff. But with arctic conditions closing in on me, I felt for this poor little frightened penguin. His dad is a bit tactless, but his mum is lovely. 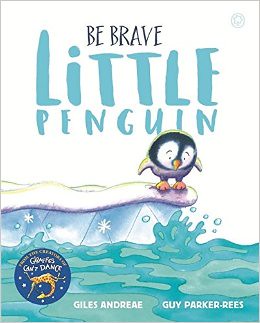 Giles Andreae has written this story about little Pip-Pip who doesn’t quite dare go in the water. It could be cold. (Probably is, down there.) There might be monsters. (Might. Probably not though.) Icy and fresh illustrations from Guy Parker-Rees didn’t do anything to entice me to consider getting in the water. I’m totally with Pip-Pip on this.

But, you know. Once dad has said his dad type comment on bravery, mum takes over and suggests that another possibility is that it could be absolutely fine, if Pip-Pip would only take the plunge. Literally.

Sweet little story, showing young readers that fear is OK, and you will overcome that fear. Eventually.

But the water looks awfully cold, I have to say.

One response to “Be Brave Little Penguin”