Police at the Station and They Don’t Look Friendly

Will Duffy be riding into the sunset at the end of Adrian McKinty’s sixth novel about our – well, mine – favourite RUC detective? It’s quite obvious throughout the book that Duffy has had enough. More enough than before. You read and hope Adrian isn’t paving the way for killing Duffy, because it’d clearly be easier to kill someone tired of his current existence. But then he has a girlfriend and daughter to live for, although the relationship with Beth isn’t going well. 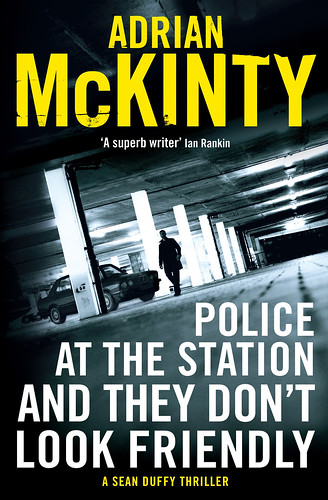 Duffy is forced to dig his own grave, but as it comes first in the book, you hope it won’t be as final as it is made to look. Life in 1980s Northern Ireland seems harder than ever, and it’s not just the IRA or their Protestant counterparts. Duffy has always annnoyed his superiors, but never more than now.

Two attacks with bows and arrows, leaving one man dead, are mystifying the police, and as always it is hard to get witnesses to come forward, because they ‘didn’t see anything.’ Healthier that way.

I could be wrong, but the religious division felt worse than ever. And ironically some of Duffy’s strongest support comes from the Protestants around him. Although school friends are not always wrong, even at times like these.

He swears a lot, drives too fast and he drinks far too much, but Duffy is still someone you want for your friend. Just like Carrickfergus in 1988 appears to be more attractive than I suppose it was, back then. You want it to end well, even if this could be Duffy’s final mystery. You want his two fellow detectives to survive, too, and you’re even hoping for a rosy future for us all.

And the bow and arrow thing is obvious once you know how and why.

Did I ever mention how much I love these books?