It’s Burns Night, and while we do not yet have any Haggis in the house, we do have a Resident IT Consultant, who not only has plans to walk the length of the country (Scotland), but has taken to reading Scottish books. More Scottish books than before, I mean. Here he is:

“On my return to Scotland after nearly forty years in England I decided it was time to seek out some of the Scottish classics that I was vaguely aware of but had never had the time to read. At school I read Kidnapped and The Thirty Nine Steps (thanks to an English teacher who knew how to pick books that would appeal to twelve-year-old boys). Some time in my twenties, thirties or forties I read Sunset Song, Waverley and quite a bit more Buchan but otherwise my reading of what I regard as classics (books written before, say, 1950) was restricted to English, American and European writers. 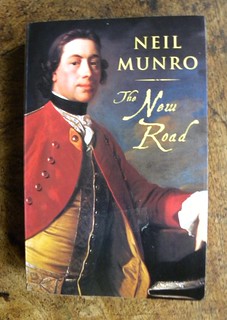 I decided to start with Neil Munro’s The New Road. I had always been aware of Neil Munro as the author of the Para Handy tales but knew nothing of his other books. Munro was born in Inveraray in 1863 but spent most of his adult life working as a writer and journalist in west central Scotland. He became editor of the Glasgow Evening News in 1918 and died in 1930. The New Road was published in 1914, was his last novel and is widely regarded as his best.

Set in 1733, the novel has much in common with Kidnapped. It has a young protagonist, Aeneas Macmaster, who, like David Balfour, has his naïve view of the world transformed by an adventurous journey through the Highlands. He is accompanied by an older, more experienced companion, Ninian Campbell.

Though Ninian is a Campbell only for the sake of expediency; his father was one of the proscribed Macgregors of Balquhidder. There’s a stronger romantic element than in Kidnapped, and it’s better developed than the romance in Stevenson’s sequel to Kidnapped, Catriona.

I thoroughly enjoyed reading it. The characters are very well developed and the plot cunningly built through a series of twists and turns that only come to fruiting in the last few pages. If you’ve enjoyed reading Kidnapped try the New Road.”

There. That sounds so good I’m almost tempted to have a go myself.

One response to “The New Road”