It was chilly. And there I was, in Falkirk, red clothes, rosy cheeks and everything, and the station footbridge was being repaired. Luckily I had my folding broom with me, so managed to cross the railway lines (my apologies for any subsequent unentangling required) and arrived at fth (Falkirk Town Hall; keep up!) with barely any delay, for a day of the 11th RED book award.

Greeted Cathy MacPhail who was shortlisted for the umpteenth time (they know a good author when they see one), still basking in the glow of her birthday the day before. She introduced me to Narinder Dhami (13 Hours), and we spent some happy minutes saying gossipy stuff about [some] people. Very satisfying. A few of the students were going round interviewing the four shortlisted authors, who also included Clare Furniss (The Year of the Rat) and Sarah Moore Fitzgerald (The Apple Tart of Hope). All beautifully decked out in red, and all looking very beautiful, too. And they were nice people… 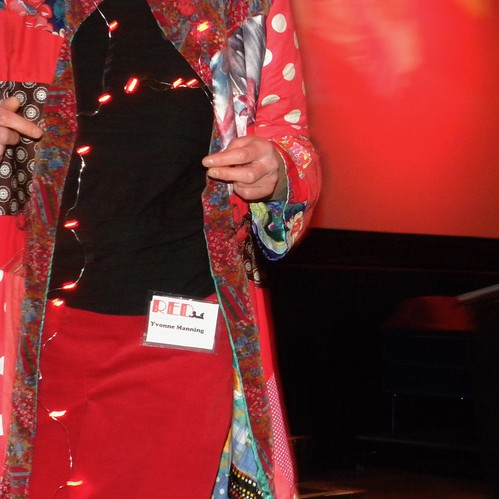 RED captain Yvonne Manning was wearing red fairy lights. Clothes, too, but those lights really caught the eye. She welcomed each school and they were as noisy as ever. She encouraged them, it has to be said. (That woman is not a normal librarian! Whatever happened to silence?)

The schools charged straight ahead with their dramatised presentations of the books, two schools for each book. Between every little show, the same slow stagehands cleared up. They really want to look into who they employ. At times they sat down and read the paper and took selfies. If we’re not careful they’ll get used to this kind of slacking, and the audience encouraging them. 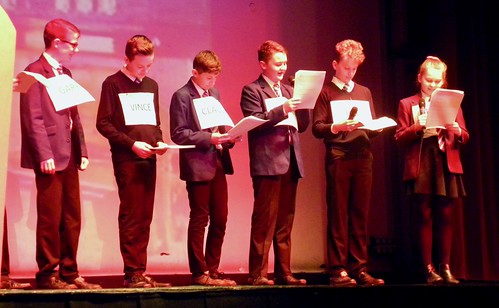 As well as the eight schools who took part, they were shadowed by boys from Polmont Young Offenders (who for obvious reasons were not present, although I suspect if this had been Sweden they would have been). One of them had written a script for Cathy MacPhail’s book, Devil You Know (very appropriate), and Yvonne got seven volunteers on stage to act it out, totally unrehearsed. They would have found it easier had there been more microphones and printing of words on one side of the paper only, I reckon. But well done to everyone; actors and script-writer!

There were prizes for best reviews, before Provost Reid went off to a council budget meeting on libraries, and as we broke for coffee Yvonne introduced ‘selfie corner.’ (It was really only a cardboard frame…) 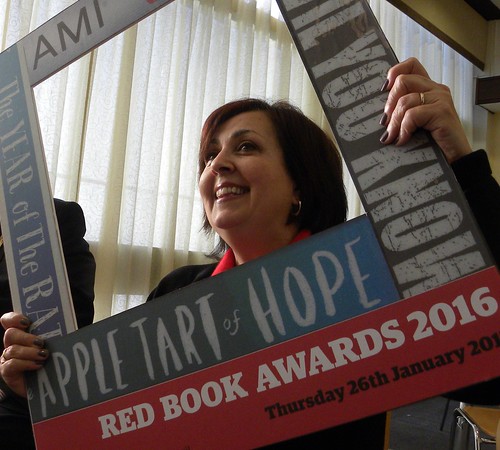 You could tell Cathy had been before, as she managed to get coffee long before anyone else. But eventually we all sat down and chatted, and I had a really good idea for a blog post from what we talked about. (It would have been even better if I could remember what it was.) 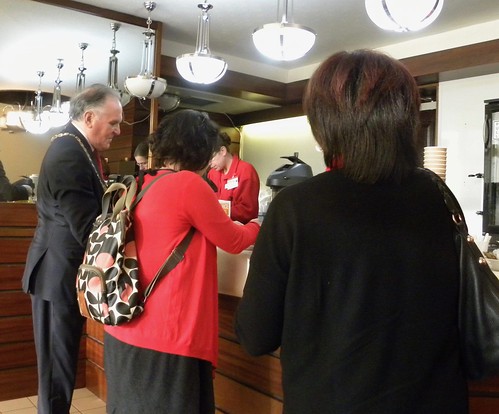 Once back, Yvonne had changed into an enthusiastic red wig, with fairy lights on top. She hoped it wasn’t too much. Well, I’m sure we were too polite to say. Before the last set of book presentations, the authors got their three minutes of saying whatever they wanted. Each. Narinder told us about her breakfast that morning (sort of, anyway), Sarah has a lovely Irish accent and Clare wore fabulous red high heeled boots, while Cathy said how pleased she was that the young offenders got her book.

The stagehands grew ever more inept as the day wore on.

Provost Reid was back by then, and he whispered to me that he could smell lunch. Clare was extremly fortunate with her school, who presented her with an iced cake at the end of their presentation. (I was worried it’d turn into a pie throwing event at first.) 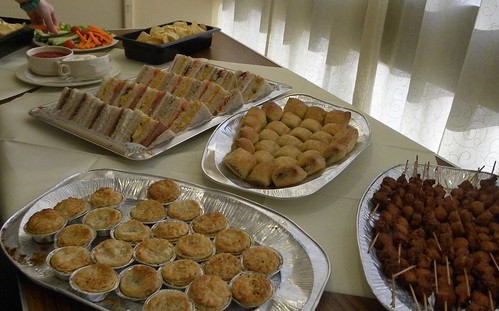 At lunch we said how fantastic it was to have an all-women shortlist and we discussed agoraphobia. As you do. The authors were asked to go and cast their votes on alternative book covers, before the signings. I asked the Provost what happened to his retirement from politics plans from last year, and he seems to have sacrificed himself for the greater good. 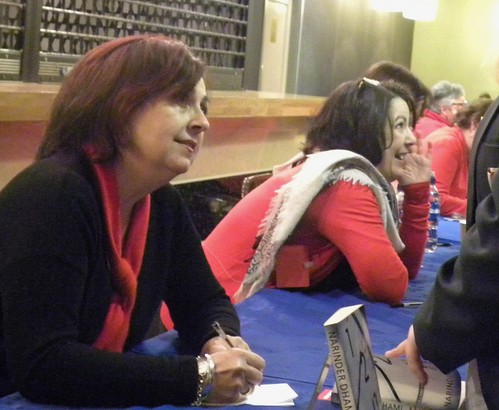 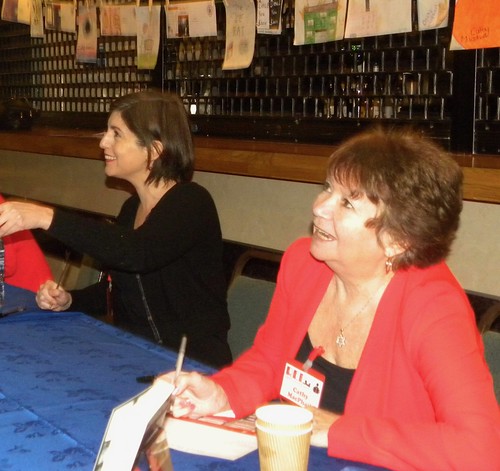 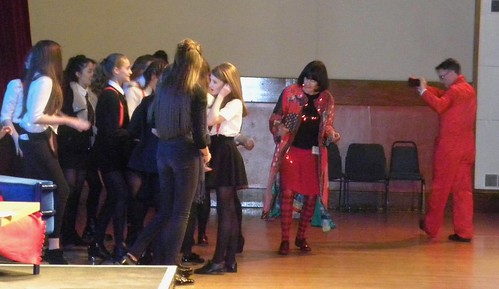 Back in the hall there was disco dancing in one corner, with Yvonne and her fairy lights leading the way. Most of the students were singing at the top of their voices, and I couldn’t help wondering if they know how ancient that music is. Grease must have been at least forty years ago? 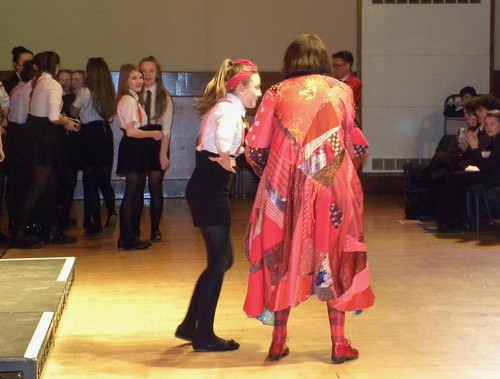 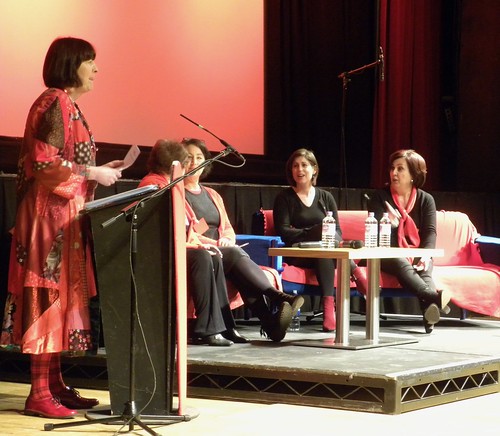 The authors got to sit on the sofas in readiness for question time, while more prizes were handed out; for best presentation, for best red accessories (I especially liked the feathers one girl wore in her hair), the stage hands, and for best book covers. 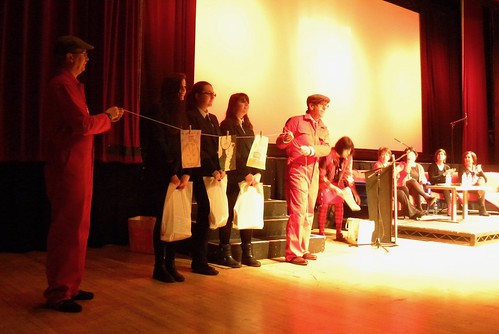 Questions were many and varied, on how long to write a book, is it hard to get published, inspiration, apple tarts, do they Google themselves, why read books, advice to themselves as teenagers, and favourite children’s books. Little Princess did well. Believe in yourself. Yes, some do Google. Time to write a book depends. Lots of good questions and the answers were all right too.

Librarian Anne Ngabia told us the latest news about her book collecting for libraries in Kenya (I have plenty more!), saying how good our children have it with free schools, even if it doesn’t feel like it. How in Kenya people might walk for three hours to the library, queueing up when it opens, and walking three hours back again. (I dare say this could happen here too, if libraries get scarcer.) And thanks to the army and the air force for sending the books out with the troops. 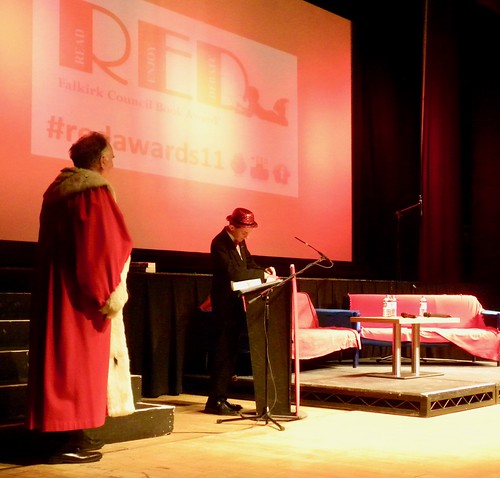 The boy with the lovely red hat got the job of opening the red envelope, to announce the RED winner. That envelope was made with very good glue. It had glued itself to the paper inside and only after a prolonged, manful struggle did red hat boy sort of manage to peer into the mangled remains of the inside and tell us that this year’s winner was Narinder Dhami! 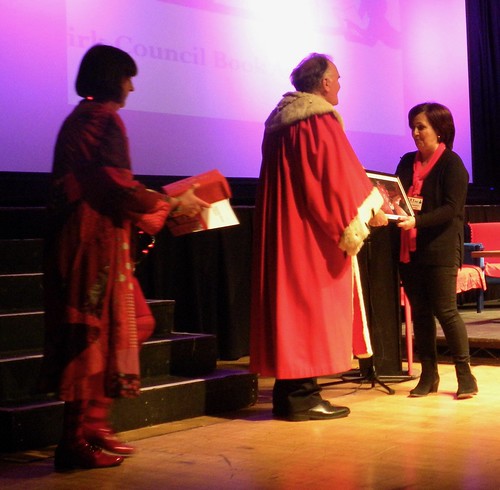 Narinder made a short speech, not even thanking her cat, cried a bit, and then she needed to sit down to stop her legs from shaking. But there were photographs to be taken of everyone, of her, the provost, envelope boy and the award (a photo of the famous Kelpies). 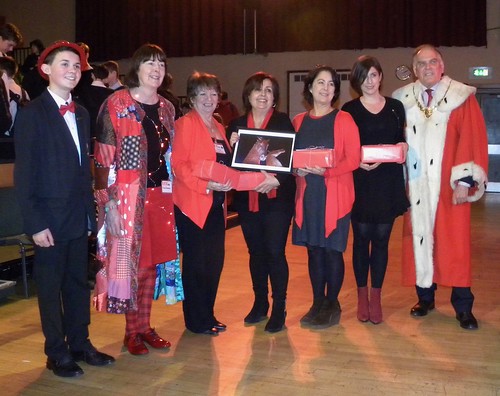 Then we went home. Me not forgetting I came with a coat, and Cathy hunting for hers. The Provost let the students try on his red ‘coat’. And Clare had a cake to carry. It was a good day.