At last! The tail is gone and the tale might be with us later this year. Philip Pullman has had a haircut – unless that BBC interview yesterday was recorded years ago – and there are claims that the first part of The Book of Dust will be available on Philip’s birthday in October. Well. 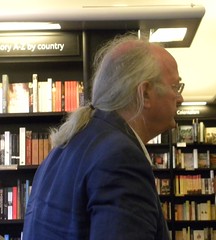 It’s been ten years since Son and I were in Oxford, when Philip and David Fickling reckoned Dust would be ready in 2009. What I didn’t know is that Dust would be a trilogy. No wonder Philip’s been so long in writing it, especially as it sounds like the second part is also complete. That just leaves the ending of this equel to His Dark Materials to be written.

The Branford Boase longlist has been announced. I haven’t read a single book on the list, and to the best of my knowledge I have not been offered any of them either. Would quite like to read Patrice Lawrence’s Orangeboy, which is the only one I’ve heard of. I would probably like to read a few of the others, too. Maybe I’ll be spurred into action when the shortlist comes.

I have just been followed on Twitter by Jacqueline Wilson. Well, not her personally, as I believe Jacqueline is sensible enough not to waste time on social media, but someone doing it for her. I’m hardly ever on there, so I won’t be taking up too much of anyone’s time.

Chris Priestley has been quoted in recent discussions on celebrity authors. It’s mainly the crazy aspect of how some very good writers still have to have a day job to feed themselves, while a lot of book sales go to those who need it less, and whose books just might not be of quite the same calibre as those by authors holding down two jobs. After all, if you are doing two jobs, it means you are pretty keen to write, and you are likely to do a better job of it.

Juno Dawson does her job pretty well as far as I understand. She writes books teenagers want to read, and she knows how teenagers feel. Juno was recently booked to talk at a school, when they decided to uninvite her at the last moment. It was deemed ‘inappropriate’, it seems. As the school back-pedalled, they said it had nothing to do with Juno being transgender. Oh no, not at all.

Most books are important and worthwhile. Hilary McKay – who claims not to mind if her books are turned into motorways – sent me this link to an article about how books are being rescued from becoming landfill. Better World Books collect unwanted books in Fife and sell them online, raising funds for literacy and libraries. Books not becoming Dust, so to speak.