The route to permanent secretary

Meeting Sara Danuis’s predecessor Peter Englund didn’t make me feel we shared a background, especially. Apart from being Swedes. Reading about the current permanent secretary to the Swedish Academy I hoped Sara and I might have had more in common. She’s six years younger, but that’s nothing between peers. At our age, anyway.

And she looks familiar, but her name was completely new to me when she made the Bob Dylan announcement last autumn. Sara lived with her single mother, who wrote books in the bathroom. I lived with my single mother, but she definitely didn’t write books, anywhere. And it seems we had more books at home.

But when I read that Sara’s mother was Anna Wahlgren, the penny dropped. They might have been poor, and she might have written books in bathrooms, but Anna was famous and she and her children featured in countless magazine articles (which I read). Maybe that was where I ‘recognised’ her from. 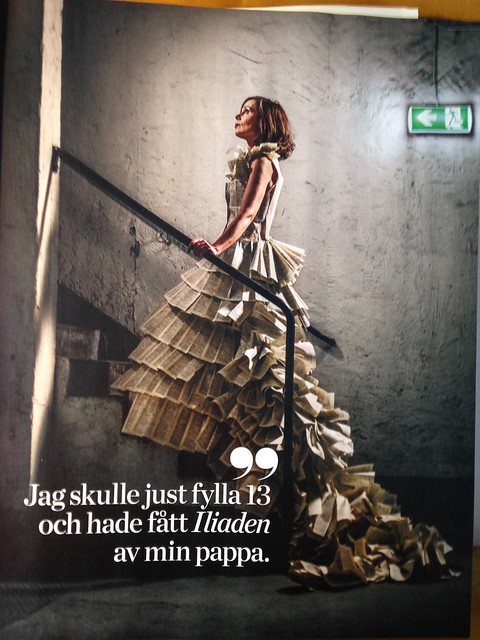 Her first own book that she bought was Ture Sventon, which wouldn’t have been my choice, but I can see where she’s coming from. Having a secretary who brings you Lent buns on demand is not a bad thing. All year round. Then, like me, Sara read what was available, which in her case was Sven Delblanc. I remember him too, including learning – like Sara – how to say his name. But I didn’t read his [adult] novels.

From there on my inferiority complex grows. While I did grapple with books typical for upper teens to read, I rarely enjoyed them, and I moved on, which in my case seems to have been backwards. Sara read Homer, Balzac, Sartre and Proust. And enjoyed them.

That‘s how you come to be permanent secretary to the Swedish Academy.

2 responses to “The route to permanent secretary”