In her new novel Fallout Sara Paretsky goes home to Kansas. She lets V I do her detecting in her own old home town of Lawrence, even if she does rearrange the place a little to make it fit the plot. Sara’s father features for a second or so, and apparently she based the story on something from his work past. 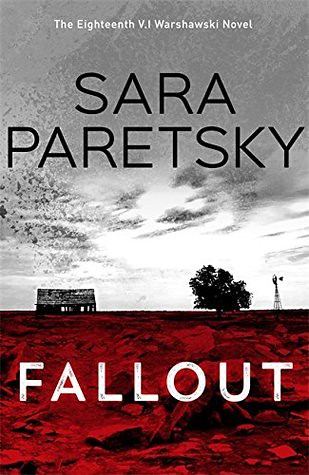 Fallout proves the theory that writers generally do better when they write about a place they know well, so it was a good move to send V I to Kansas. I’m not sure, but I wonder if this was the most Chicago-free of all the Warshawski novels.

Anyway, they do things differently down there, and before long the whole of Lawrence knows exactly what V I has come for (to find two people who have vanished from Chicago), and they seem to keep track of her wherever she goes. They literally are.

And Fallout is precisely what the story is about, in more ways than one. As well as mentioning NCIS several times, Sara goes a bit DiNozzo with her clues, and V I makes a Faraday cage! V I’s missing pair are really only the catalyst of what’s going on in Lawrence, and the crime takes us in a rather worrying direction. It’s feels more generally political than has been the case in the past, and that’s despite the book having been written before the Presidential election.

The plot is kinder than they have been, or do I mean less violent? Not that V I is muscle before brains, but the most menacing thing is the way everyone ‘knows’ everything. It can get quite claustrophobic when you have no privacy in your detecting. Or so I imagine. I obviously wouldn’t know.

But there are also some very promising local characters, understandably different from the inhabitants of Chicago. I loved this, as long as I don’t have to go down into Doris McKinnon’s cellar.