Phil Earle has a son called Stanley. This Little Gem is about a boy called Stanley, who has a Superhero dad (so I can only assume Dynamo Dan is based on Phil himself…). The problem is that after a full week of Superdad deeds, dad is rather tired. Will he fall asleep in the park? 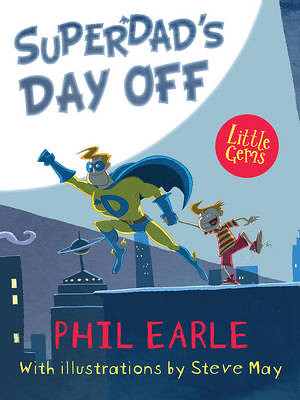 Stanley needs to make sure his dad gets some rest, but he also wants to have fun in the park.

So when the world needs Dynamo Dan’s services, Stanley can’t let his poor dad spring into action. And if not dad, then maybe Stanley can do it?

He can. Stanley is your man if you have a panther up a tree or your house fills up with water from a leak somewhere.

Dad gets enough rest so that when he’s really needed, he can join forces with his super son; Dynamo Dan and Super Stan.