‘If the bacon flashes…’ It was late. I was tired. And some sign appeared to mention flashing bacon at Edinburgh airport. The second time I looked it said beacon. Whatever. I need to give up careless reading. 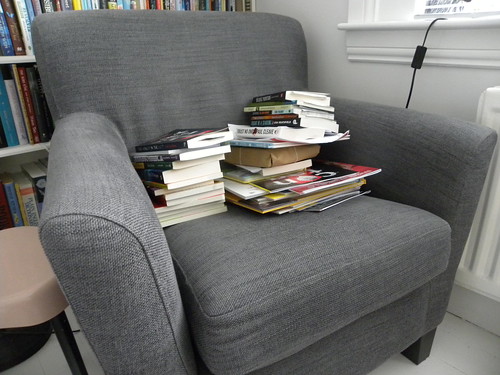 We arrived home in the middle of the night. Thank goodness for 24 hour M&S where you can get your milk and juice and bread. Not to mention blueberries. Possibly also bacon. The postman hadn’t been too busy carting vanfuls of books to Bookwitch Towers while we were gone. Almost half of what you can see here arrived five minutes before we left. We had a quick look, in case there was anything that warranted a change of holiday reading plans. Yeah, I know the armchair should be for sitting in, but the books had to go somewhere.

Our leftover holiday milk was left (obviously) for Son who took over after us. His route from Helsingborg on Friday had him meandering between visiting the New Librarian, picking up Dodo in Copenhagen and [finally!] meeting ‘his’ author Andreas Norman, a mere three years – or is it four? – after translating Into A Raging Blaze. Seems selfies are the way to go these days. (My arms are too short.) 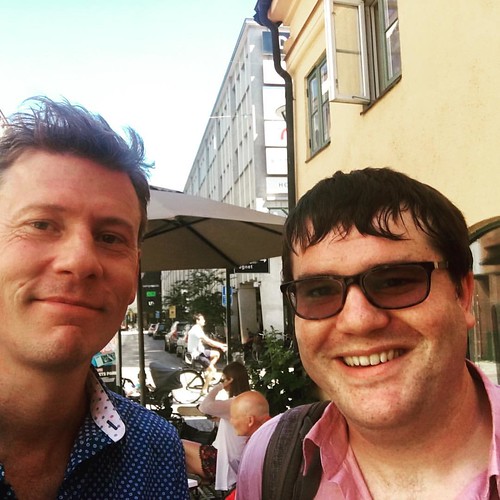 On the home front the Carnegie Medal was busy being given to Ruta Sepetys on Monday. I wish I had read her winning book, Salt to the Sea, but despite no one sending it my way, I am sure it was a worthy winner. I’ve loved Ruta’s other books, and the refugee topic is as important today as it was in 1945.

Ending on a sad note, Swedish author Ulf Stark died a week ago. Having spent most of my life fairly unaware of him, it’s been different since I met Ulf in Manchester five years ago. There is never a good age to die, but Ulf was definitely too young to go at 72. Goodbye, and thanks for the singing. 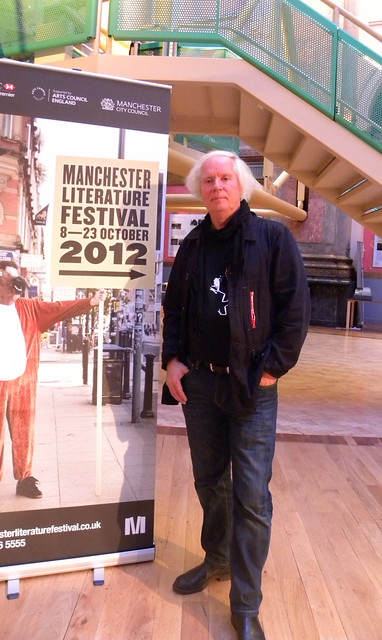