To be honest, I’d been expecting the cliffhanger in Teri Terry’s Contagion to be, well, cliffier. So many readers before me had exclaimed about being left hanging. So, yes, I knew it was coming. Not that I will require a cliffhanger to motivate me to read on, when the time comes. Which I would like to be sooner rather than later, but the Witch who waits for something good…

It’s very much a ‘whew!’ story. This dystopia is set in a place close to me, in what feels like today. There is even a female PM. The thing about Teri’s writing is that she takes topics that could be quite distasteful and that would turn people off, but the way she writes about these very horrible things makes it – almost – all right.

It’s obviously not OK that 95% of people die, but looking on the bright side, 5% survive. As in the Slated trilogy Teri has some great mothers. I wish more fiction had good mother figures. 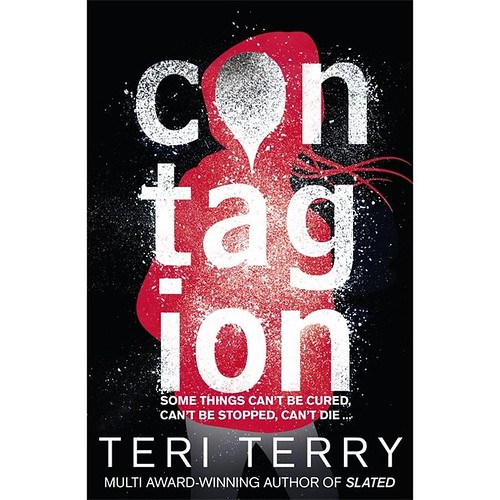 Set in and around Scottish Killin, plus places from Newcastle to Shetland, Contagion features Callie, a missing 11-year-old girl, her older brother Kai and Shay, the girl who last saw Callie. Somehow they end up at the centre of an epidemic that kills fast, and when they realise that all is not as it should be, even under these circumstances, they decide to get to the bottom of what’s happening.

Perhaps Shay is slightly too clever even for a fictional, 16-year-old heroine with exceptional talents, but I like her. It’s good to find someone who can be both cool and interested in science and more than capable at maths. Kai is very handsome. Naturally. And Callie is quite unusual in many ways.

I have great hopes for the next instalment, with fingers crossed that somebody will survive, and doing my best not to ponder that I probably wouldn’t have, had this been real.