I am short, and getting shorter. In secondary school I had a classmate who was smaller than me, but I never gave this a thought, until I bumped into him five years later, when he was extremely tall. How he felt I’ve no idea.

I might have found out in Kate Scott’s book Giant. When you’re young, it’s not much fun being different; whether you’re smaller, or taller, than the other children. 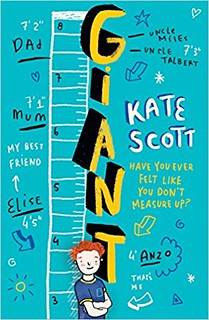 Anzo (the name means giant) has a noisy and fun-loving family who are all very tall. He is frequently mistaken for Y1, when he is actually Y6. A midget aged eleven. Anzo gets teased [bullied] and generally overlooked. His family probably love him, but never seem to notice what he says or does.

Luckily for our hero, he has a rather good friend at school. Elise knows how to make him grow (maybe not) and is supportive (bossy) when he needs it. Anzo goes from being cast as the seven dwarfs in the school play, to being able to pretend to be adult, rather like the character in Frank Cottrell Boyce’s Cosmic.

This is a wonderful and humorous story about not fitting in, and eventually discovering that what matters is knowing what you want to do. And that’s not necessarily to do with stature.

You will love Anzo.