In Ash Boy for Barrington Stoke, Lucy Coats introduces us to Cinders the fella. She turns most of the traditional Cinderella story upside-down, in what turns out to be a really enjoyable tale. I mean, I object to the bad treatment of anyone, just about, but it’s quite satisfying to have someone other than a girl do some of the cleaning… 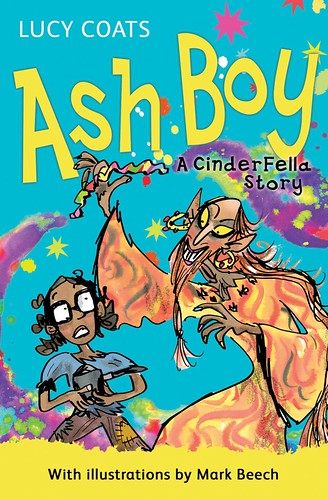 Not only is Cinderella a boy, but I suspect an Asian boy, which brings another welcome aspect to this well known story. I can’t quite place it in time, as it appears both thoroughly modern and also several hundred years old. It borrows ideas from the fairy tale and the Disney film as well as the traditional panto. (Swedes have no Buttons, for instance.)

I digress. This is great fun, while obviously being rather sad, what with the demise of Cinder’s mum and the hardship he suffers, bullied by his step-brothers Rock and Boulder and their mother Mrs Karim.

And then comes the invitation from the Royal family, where the winner of the Grand Quintain Contest will be granted a favour of their choice by Princess Betony on her 14th birthday.

You can guess how it goes.

Did I mention that this is really fun?

One response to “Ash Boy”