The Roman Quests – Death in the Arena

To be honest, I was afraid the death count might be bigger than I wanted it to be. Caroline Lawrence has been known to kill in the past, and people I didn’t want to see dead, too. And let’s face it; to make Roman Britain realistic, you can’t have too many lucky escapes, can you?

Well, I’m obviously not going to tell you if they live or not. There is quite a bit of blood. There are dangerous beasts, and at times even domestic cats can be life threatening. 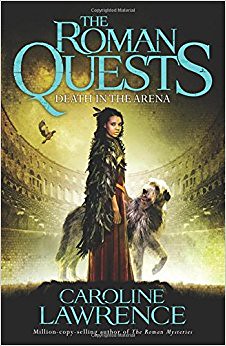 The third Roman Quests and the turn has come to Ursula to have her tale. She loves her animals, and she loves being a Druid, which is all good apart from the fact that Druids are to be executed if found. The three siblings from Rome are then given a task by Flavia Gemina, which involves our old friends Lupus and Jonathan. Always nice to catch up with old friends.

There is the tricky task of attempting to reunite separated twins Castor and Raven, and getting rid of the Emperor Domitian while also staying alive is a big job.

And romance! These young people fall in love at the drop of a hat. It can be hard to know who you really, really love, and maybe it’s more than one? The modern reader has to keep in mind that the children are of an age to justifiably be thinking of who to marry.

Death in the Arena shows us what sort of entertainment they had back in AD 95. Audiences wanted to see blood from fights between beasts or ritual sacrifice, but also more normal fun, such as music and comedy. Mixed up in the one show, it feels rather over-powering. But nice to know that Lupus is now a superstar with fans! I always liked that boy.

Caroline continues to educate as she entertains. And I do like the long line of continuity from the early days of the Roman Mysteries. Carpe Diem.