The days are getting shorter. Well, I suppose it’s that time of year. And it felt like even the long trains were also shortening; unless there really were that many extra daytrippers yesterday, being a Sunday and that.

I didn’t quite make it to see Jo Nadin or Tony Ross at their signings, but you can’t have everything. I was there for the event with Maria Turtschaninoff and Alwyn Hamilton, chaired by the little known Daniel Hahn. It was in the new Bosco Theatre venue, out on George Street, and this was my first time. What I will say is that Theresa Breslin was spot-on earlier in the week, when she said it was lovely, but not for wearing stiletto heels in. At the time, Keith Charters and I looked at each other, both fairly secure in the knowledge that we wouldn’t be.

The other thing about the venue is that the signing tent is very small. No room for Bookwitches wanting to take pictures, except for this close-up of Alwyn’s handbag contents. But I dare say it wasn’t made with me in mind. 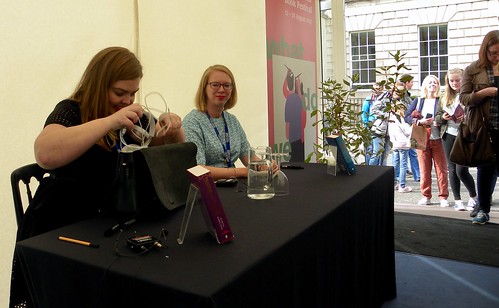 I joined Daniel Hahn outside instead and forced him to sign a book (one he had edited, so I wasn’t being totally unreasonable) and then he made me want to go to Denmark with him in October…

After this fantasy event I wandered back to Charlotte Square, catching William Dalrymple signing for a queue of fans, after what looked like a full Main Theatre event. I feel I know, as I stood there trying to take photographs of Chris Close’s picture display, and I tried at just the wrong moment, when the whole tent walked past, very slowly. Well, obviously it wasn’t the actual tent that moved, but the people who had been in it. 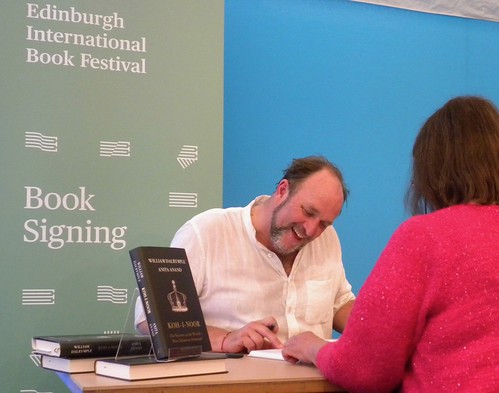 Hoped to see Ross Collins and Claire Barker after their event, but they must have been busy chatting to admirers, as they hadn’t emerged when I had to make a move.

Because, dear readers, I had an interview to conduct, and was meeting Maria Turtschaninoff in the gap between her own event and seeing Jonathan Stroud. We sat in the sunshine on the deck outside the authors’ yurt, chatting about mothers and books and how arrogant Sweden is towards the other Nordic countries. I mean, I said that. Maria is far too polite to.

And as she went off with a bagful of Lockwood books, I walked to Waverley again, prepared to fight the other festival-goers, but struck lucky by finding an unexpected train going my way a couple of minutes later, and it wasn’t even full. 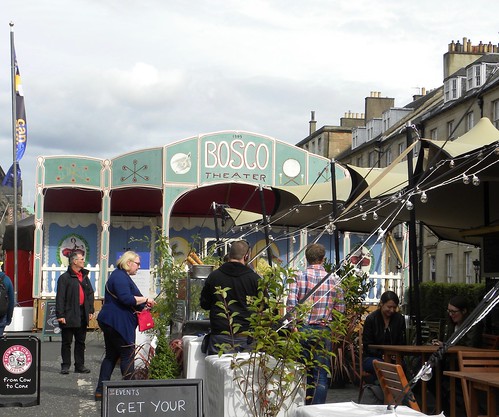