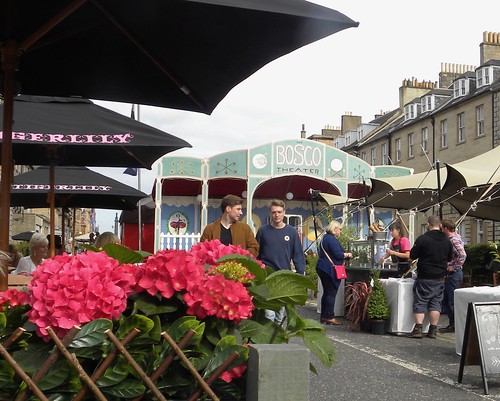 As I approached the Bosco Theatre to do a bit of a recce 25 minutes before the event with Alwyn Hamilton and Maria Turtschaninoff, I was surprised but pleased to find a queue of fans already waiting. I suspect it’s the fantasy effect, which seems to have really keen fans. Girl fans, mostly. And I have no idea who they came to see, Alwyn or Maria. I understand that Alwyn is quite big. But then, I believe Maria is big too.

Chaired by Daniel Hahn, these three knew what they were doing, having already got together for an event in Hay. Alwyn wore the wrong – but lovely – shoes, and walked down those stairs carefully, so as not to get stuck in the gaps. Maria wore a Moomin dress, i.e. made of a fabric that might have looked like white spots, but those spots were Moomins. (Philip Pullman would kill for a dress like that!)

To the accompanyment of screeching seagulls outside, Daniel introduced the ladies as exciting new voices in YA fantasy. He started by asking them how they came to write, and Alwyn said she falls asleep by making up stories in bed (me too, which is why I fall asleep), and she really can’t undertand how people who don’t write manage to sleep. From there she moved on to Harry Potter fan fiction. 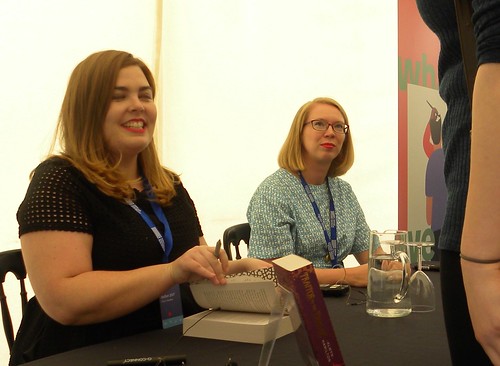 Maria admitted to being far too old to have done any Harry Potter-ing, but in kindergarten she would be allowed to stay up when the other children had a nap, and she would write stories. So while Alwyn sent herself to sleep, Maria stayed awake. She liked Moomin, so wrote Moomin-style stories. She knew she could write, but didn’t have ideas of her own. She wants writing to be easy; a bed of roses.

Alwyn wanted to write about girl heroines, but discovered that it was considered wrong to have girls do what male characters have long been doing. ‘Dragons were realistic, girls were not.’ Girls were not strong enough. She wanted sharpshooters, in order to avoid the requirement for strength, and it became a sort of Western crossed with a Thousand and One Nights.

Maria found a Greek island where women were forbidden to land, and this inspired her to write Maresi, about an island that didn’t permit men to visit. Both authors agreed that you just have to wait for things to click, and then the writing will work.

Reading from Naondel, Orseola’s story – because it was the happiest – she said she has not tried to protect her characters from bad things. You only need to look at what’s in the news to realise how much bad stuff your readers will already be aware of.

Daniel asked about gatekeeping, quoting teachers on an awards committee, who wanted to recommend certain books to their pupils, but feeling they were not allowed to do so. It had to be the parents who permitted their children to read. Maria said that she was not aware of any banning of books in Finland, and that Naondel was part of a book parcel offered there.

Alwyn read from chapter two of her second book in the Rebel of the Sands series. When she writes she likes to do so with fast music in the background,  and she needs to write fast, using placeholders to get past obstacles, saving details for later. And that’s also when she removes unnecessary details. The most she’s ever written in one day was 8000 words. Maria sets a goal of perhaps 2000 words, because she is lazy and she needs to have something to work towards.

Asked about how to deal with writer’s block, Alwyn said she always carried a notepad, and she would listen to people on the bus, and write things down, and she’d look at people and practise writing descriptions of them. ‘Me and my art,’ she called it.

Regarding writing ‘real’ books instead of fantasy, the answer is that if you don’t like reading those ‘real’ books, then you can’t write them. 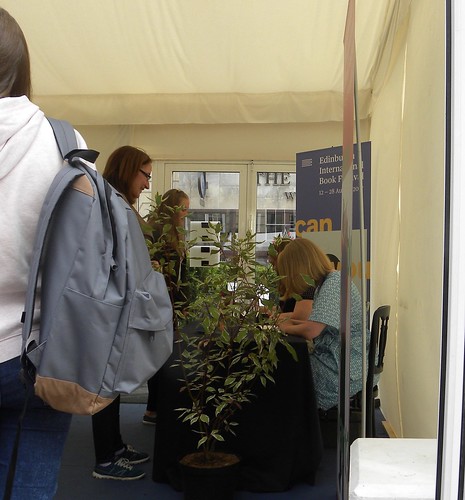 Another question was how to explain what a fantasy world is like, if that world is the norm to those living in it. The best solution is to introduce a newcomer, like Maresi, who then describes what she learns about the island. Or you take an outsider like Gulliver and put them in ‘a situation.’

I hope Alwyn’s fans grew as interested in Maria’s books, as I did Alwyn’s. And there really is something about fantasy fans.