Thanks to me wanting a scone (although it turned out not to taste terribly nice) I found Moira Mcpartlin downing an espresso at the station café, which was very nice indeed. We were both going to Edinburgh, so suddenly I had company, which was both welcome, and positively useful, as Moira kept me awake. And there was all that delicious book and author gossip to engage in. 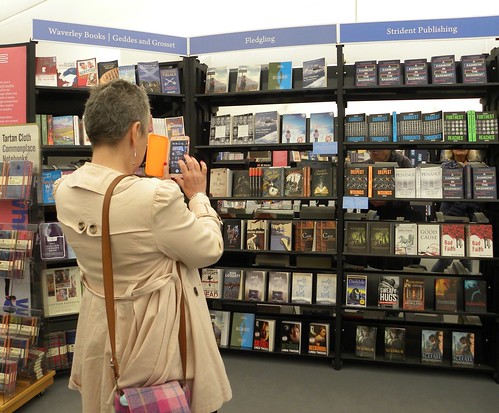 In Charlotte Square the first thing Moira needed to do was photograph her own book (Wants of the Silent) in the bookshops. Which is a perfectly normal thing to do. Then we went over to admire [the photo of] Kathryn Evans in her swirly dress, and as we stood there a black clad figure wearing an enormous witch’s hat walked past and into the Corner theatre. 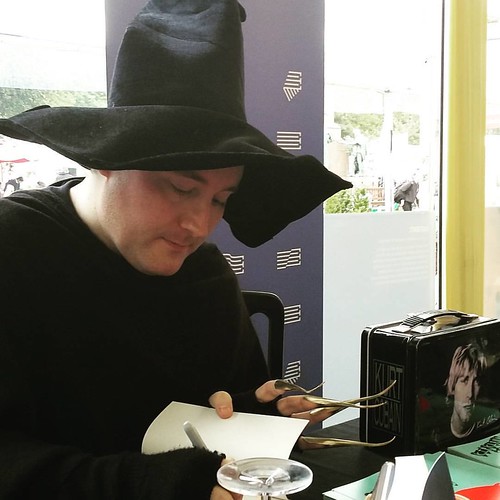 An hour or two later I discovered this had been Kirkland Ciccone. It being a really warm and humid day, he said he’d been too hot, except when you’re as cool as he is, you can’t be too hot. So that’s fine.

The first thing for me was to find Amanda Craig who was signing after a morning event in the Spiegeltent with Gwendoline Riley. Amanda told me it had been a good event, and how much she enjoys the book festival. 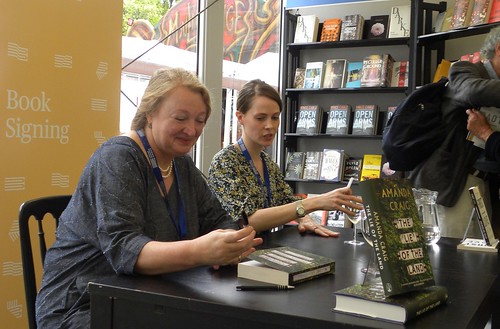 I rested in the yurt for a bit, and was able to hear all the shouting going on in the tent next door where Lari Don was entertaining a large horde of schoolchildren. Caught her just before her signing, when she was having a one minute rest. 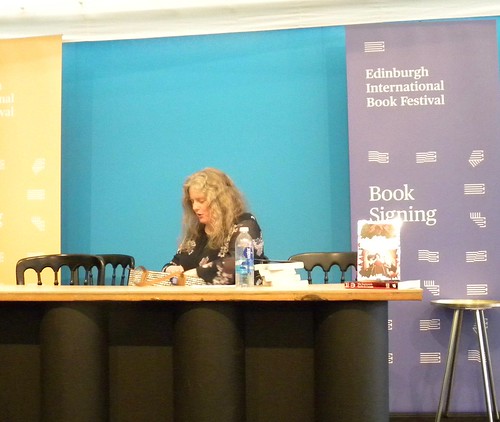 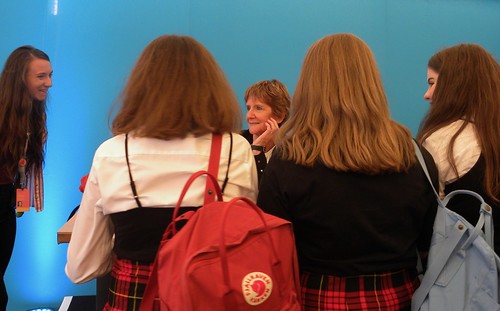 My main reason for day 6 was to join Theresa Breslin’s school event (they said I could), so Frances kindly walked me over there and told them it was all right for me to sit in. When Theresa arrived, she handed me a school tie from Mr B, to make me blend in a bit. It made all the difference. And the event was much better than the one in my dream in the early hours (the reason for me feeling so sleepy). 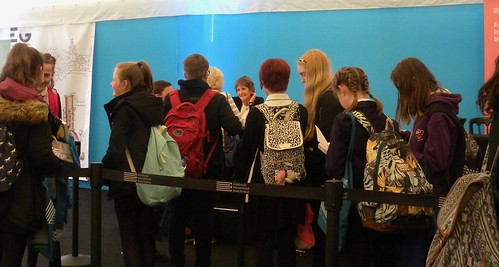 Afterwards Theresa signed for a good hour, which meant I also managed to see Nicola Morgan who was half an hour behind in the signing tent. That’s what I like about these weekday school event days; my authors all over the place. So then I slipped across the square to the children’s bookshop, where I saw Judy Paterson, and Jenny Colgan with Kathryn Ross who had chaired her event. 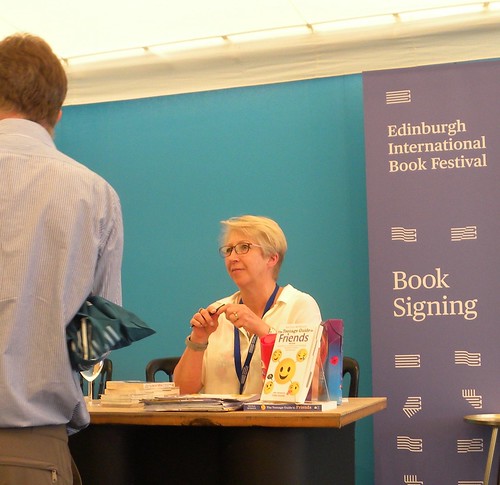 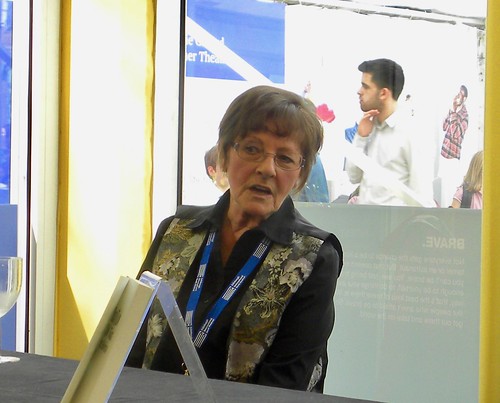 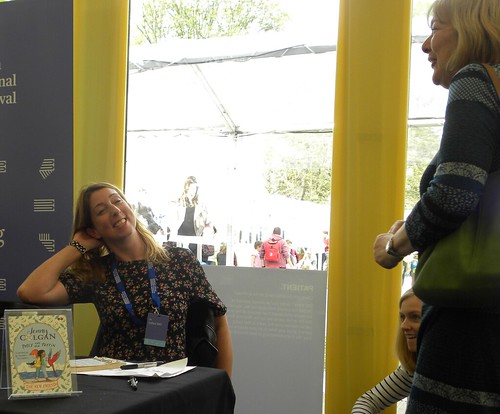 On my way back to the yurt I encountered Cathy MacPhail en route to the Main theatre and there was time for a little hug. Saw Elizabeth Laird arrive, and then went to sit outside the yurt while waiting for a last photocall. Press boss Frances went off to buy green ice creams for her crew, which they licked in the rising heat, after first taking pictures of her posing with the five cones. 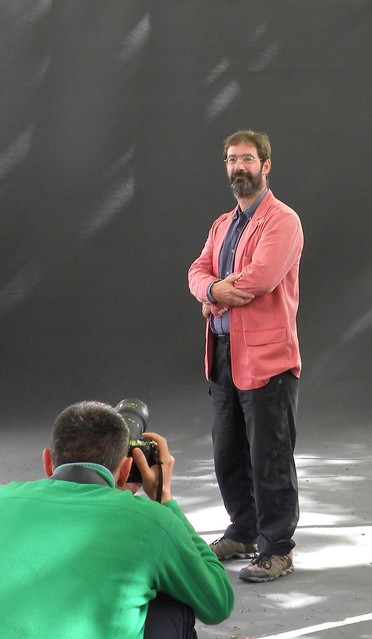 At last it was time for Norwegian crime writer Thomas Enger and James Oswald to face the paparazzi, and me. I think they were both taken aback by the onslaught of so many cameras all at once. Chatted to James while Thomas was being ‘done’ and it sounds as if it’s not something he’s used to encountering. And when it was James’s turn, I mentioned to Thomas that we’d met in Manchester a few years ago. Luckily he remembered who he’d been with, as my memory was fading a bit. 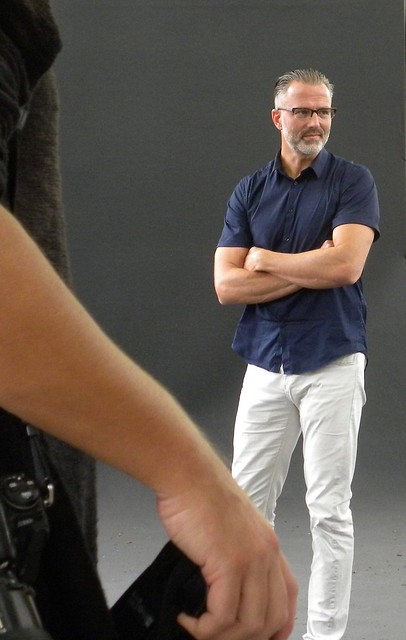 I picked up my school tie and half-eaten scone and walked to Waverley in the heat, ‘enjoying’ the piper on the corner, and narrowly missing my train. But there was another one soon enough, and it was both cold and empty, which is the beauty of travelling mid-afternoon and mid-week. 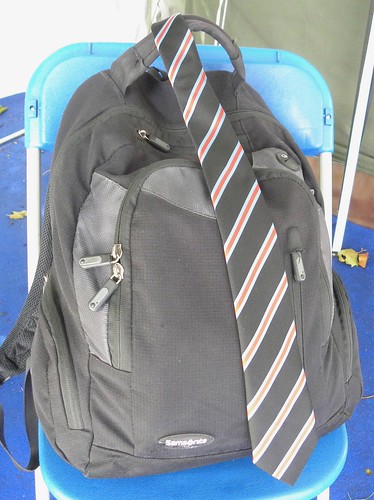