Talking about a revolution

I’ve said it before, the school events at the book festival are often the best. And I was grateful to masquerade as a secondary school pupil on Wednesday morning. As I said, I even had my tie. Although, not all the students wore uniform; some did, some didn’t.

Theresa Breslin was there to talk about revolutions, and mostly the Russian revolution one hundred years ago. Lindsey Fraser introduced her by saying that she has known Theresa a long time, and she has always been interested in many different things. This is obvious from all the books she has written, on a variety of subjects, and always good.

To begin with Theresa read from chapter one of The Rasputin Dagger, about the massacre in St Petersburg in 1905. It’s something I recall from my school history books, but it was never like when described by Theresa. She really does bring history to life. 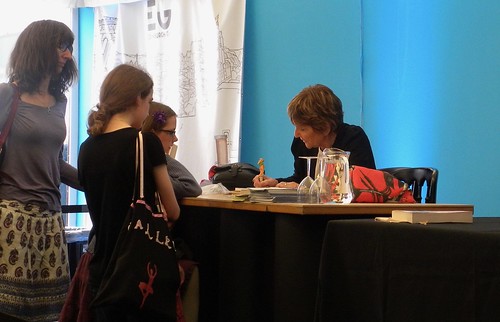 The character Stefan was twelve years old when he took part in this peaceful march because people were starving. And then his mother and many others were massacred. He was radicalised by this, and it made what happened in 1917 the only way forward for Stefan and countless others.

The dagger in the story was one Theresa found in the Topkapi Palace in Istanbul many years ago, and just knew she had to use in a story. And some years ago when the Edinburgh Book Festival sent fifty writers to different places in the world, they sent Theresa to Siberia. It was somewhere she’d never have gone otherwise and it was a fantastic experience. She loved the light in Siberia. Less so the idea of encountering wolves and bears in the wild.

She talked about Rasputin and his background, and about the haemophilia the Tsar’s only son suffered from. She showed photos of the Summer Palace and the Winter Palace, where the Royal family lived, seemingly oblivious to the suffering of the people.

When writing this book Theresa had a deadline, since it was about what happened in October 1917. And as it was about real people, she couldn’t change what actually happened. She looked into the rumours that Anastasia survived the murder of the Tsar’s family. 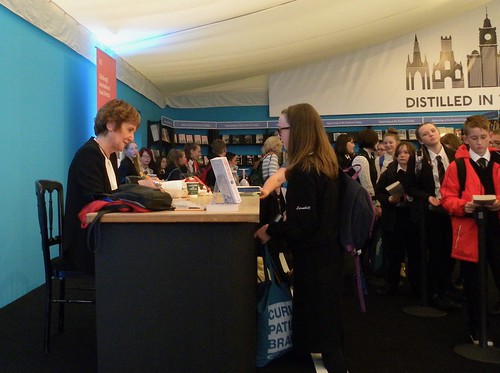 When she was in Siberia she collected names for characters, and made lists of things like street names. Sometimes she needs to get to know her characters before she can tell what their names might be. And to, well, maybe confuse herself, Theresa would hold her notebook up to a mirror to try and read mirror image, seeing if she could decode the ‘Russian style’ words.

Talking about Charlottesville today and how there is a split between the sexes on how people perceive what’s going on, Theresa reminded the pupils that whereas women had few rights in Russia, in 1917 more women there had the right to vote than did British women.

Asked which of her characters she might be, she felt she is Frances in Remembrance. And she recalled the librarian of her childhood, a ‘dragon librarian’ who forced children to pass a reading test before they could borrow books. Theresa mused on the fact that she went on to become a librarian herself… 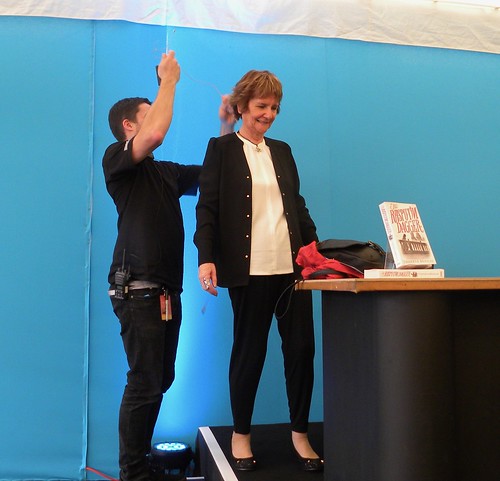 She also remembered a very bad review in one of the Sunday papers once. Mr B brought her tea in bed, which made her realise it was bad news. But her son-in-law later barbecued the review.

2 responses to “Talking about a revolution”