Lari Don has a nice turn of phrase. Just listen to this; ‘So that’s how dryads define excitement … Watching plants grow slowly upwards!’

I know that her Spellchasers trilogy – of which The Witch’s Guide to Magical Combat is the last book – is really for fairly young readers. But there is certainly no talking down at them, and I have to say that I enjoyed this. Even ignoring the fact that I obviously can’t pass by such a witchy title. 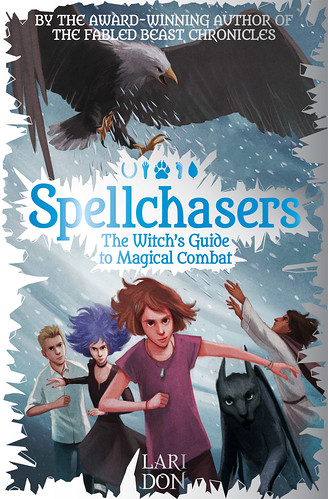 From the first book about Molly, who turns into a hare when she hears a dog bark, I felt the characters could easily be older than the 11 or 12 I believe they are meant to be. And that’s because these children are mature, and the language is older than you sometimes get for this age group. Which is good, because it will help the readers grow and learn, while having fun.

Molly can now become almost any animal, and not only by hearing barking, so she needs to learn to control that magic. But they have all lost some control of their powers, or they have too much. Theo might kill off the whole neighbour-hood, and Innes really shouldn’t quarrel with his dad, and whatever happened to Atacama, who seems to be asleep? Beth is feeling extra protective of her trees, and the old witch has ‘lost’ her powers. So not everything is as it was.

There is the usual bluff and double-bluff, when you can’t be quite sure if someone is on your side. Our versatile group of friends needs to find a way to set things right, preferably without causing mayhem. And Molly has to decide if she’s to become a witch, because ‘it seems daft to become something that I’m not, in order to stop being something that I am.’

That I can identify with.

I’m not surprised that Lari has some pretty eager fans. She had a launch for her third book last night, and I remember the fans at the launch for the first book only five months ago. Who could resist such fun, not to mention a book with such a shiny cover that it lights up the whole room?

This entry was posted in Authors, Books, Reading, Review and tagged Lari Don. Bookmark the permalink.