Getting rid of the bodies – Bloody Scotland

Yes, I am aware I made this year’s Bloody Scotland the beginners’ festival, but James Oswald is my new crime writer. When he turned up four years ago to take the place of Eoin Colfer, I was disappointed, but only for about three minutes. And anyone who can, if not exactly replace our favourite Irishman, be just as good but in a different way is, well, good. Yes, I know I just said that. Besides James was given the extra handicap of having to read after Colin Bateman.

And he survived! After a few years of coming back to Stirling, and being part of panels of three or four, here he was, practically on his own, and in a full Albert Halls at that. Yes, I know he appeared with Sue Black, the famous forensic anthropologist dame, but I usually think of her as being paired with Val McDermid, so this was definitely a step up, or two [for James]. And Lin Anderson was there to keep order as they talked corpses and what to do with them.

Lin actually insinuated that we in the audience were somewhat suspect, as though we all had dead bodies we needed advice on disposing of. 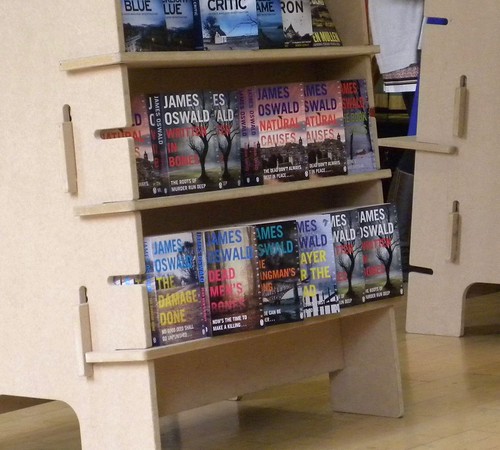 They spoke mostly about James’s latest Tony McLean novel, Written in Bones, and where he put his corpse and what could be done with it after. That’s up a tree in the Meadows (just outside Lin’s flat, I gather), and the trick is how you remove a body without it deteriorating or ending up all over people and roads and that kind of thing.

Sue told us about different injuries to bodies, ante mortem, peri mortem, and post mortem. James apparently got the idea for using a cherry picker from a friend, but when asked if she’d like to go up in one to look at a dead body, Sue replied ‘God no!’

James admitted that Tony McLean is a bit him. He has given Tony most of his own hang-ups. And he does actually own three Alfa Romeos, albeit only one that works and lives in the garage. The other two are in the cowshed. Despite making Tony’s grandmother such an integral part of the books, James never knew either of his; only his maternal grandfather. 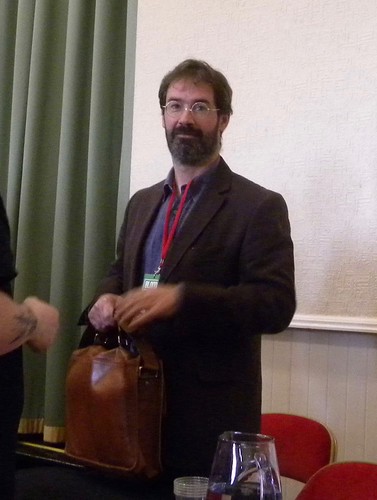 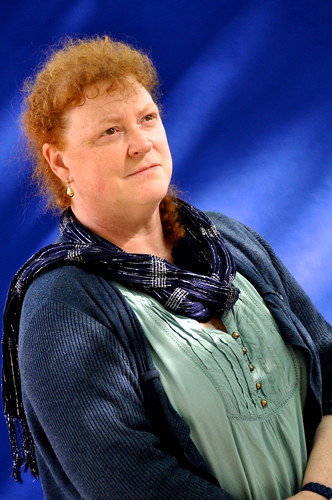 Sue didn’t enjoy counting dead fruit flies at university, so switched courses at some point. She also had a gruesome tale about a barbecue where you first had to choose your meat, while it was still a living animal… It could be that Sue really doesn’t know what to do when she grows up, but meanwhile she is Professor at the University of Dundee, where she raised half of the two million pounds needed for a new, bigger and better mortuary.

That’s where Val McDermid came in, bringing her crime writing friends in to raise money, for what is now the McDermid Mortuary, after its largest donor. The various tanks in the mortuary were named after other authors, but Lee Child said they couldn’t have a Child tank, so it’s now named after Jack Reacher. Somewhere in the tale of raising money, there is a cookbook, which Sue said was perhaps not the best thing for when you’re involved in disposing of bodies. And beware Sue’s husband’s margaritas. Have one, or possibly two, but after the third you’ll ‘never walk again.’

Talking about the bodies donated for research, they have an annual memorial service for these people, because it’s important to remember who they were . On the other hand, Sue doesn’t approve of ‘body farms’ and after hearing what they do, neither do I. And because we are all experts now, after watching CSI, people like Sue can never hope to compete in court, so juries are less impressed.

James said that on one occasion he made Tony travel outside Edinburgh, to victims discovered near James’s own farm, and when Tony needs to clear his head by going for a walk, he is chased by James’s highland cows. As for himself, he’s so shy he has never asked the police about procedure, afraid he’d be arrested if he did. For him the touchstone is whether what he’s writing is plausible, and he will rewrite if worried. His first bit of fan mail came from a retired policeman who was so impressed he wanted to know who his source was, because he could almost guess. 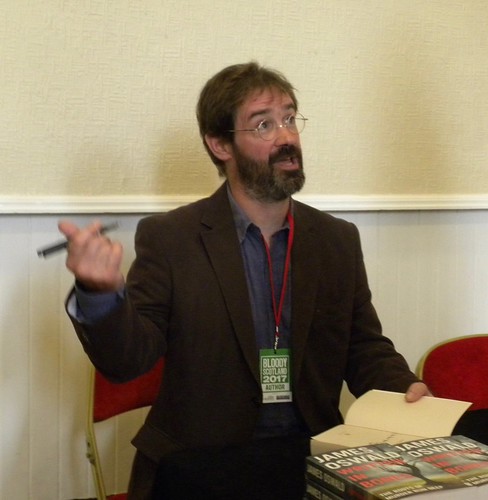 There wasn’t much time for questions, but a member of the audience said they’d done a tour of the mortuary, and it was wonderful. Sue said ‘there is no fear in death,’ but James pointed out he’s really sqeamish and has never actually been to a mortuary…