I stood right next to the sign for Theresa Breslin’s book launch at Waterstones Sauchiehall Street as I asked a member of staff where it was going to be. Obviously, I only noticed as he’d very politely told me second floor. It’s not easy being an idiot.

After another turn round the lower ground floor just to show I was in no hurry, I got the lift up to the second floor, marvelling at the thickness of the floors, as well as feeling slightly ill. It’s a glass lift and you can see ‘everything.’ Seeing as I could see so much, I immediately noticed Alex Nye and a surprisingly soberly attired Kirkland Ciccone browsing crime fiction at – separate – tables, as though they were there separately.

Still feeling the shock of Denise Mina’s Bloody Scotland story, I unburdened myself to Alex, who just might have read a little in the shop’s copy to see what the fuss was about. Seems she’s a Thomas Hardy fan…

Anyway, both of them actually needed to buy books. I wonder how that feels? 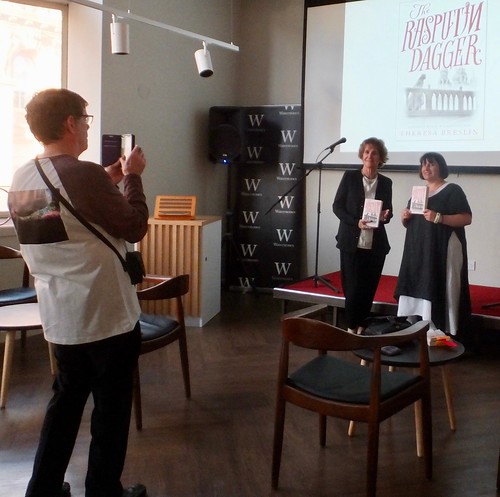 When we were allowed to enter the events room I found Mr B, who did what he does so well; whipping out a fake beard, pretending he was Rasputin. I don’t mean he always tries to be a Russian monk, but that he enters into the spririt of his wife’s books. This time his personalised t-shirt had a dagger on the back. Better than in the back. 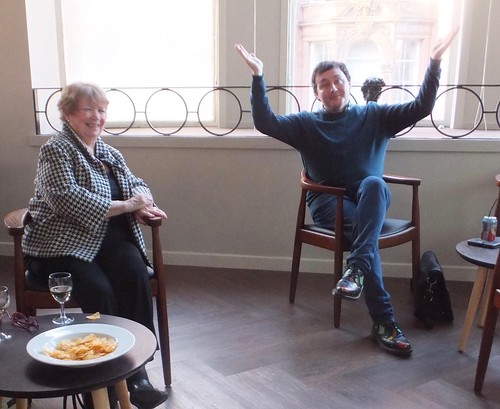 Cathy MacPhail and Moira Mcpartlin joined us and we sat down over drinks and crisps, although we gathered we were meant to stand up. I’m too old to stand up, so we rebelled. Also encountered Kathryn Ross and Kate Leiper, with Yvonne Manning, which was nice. 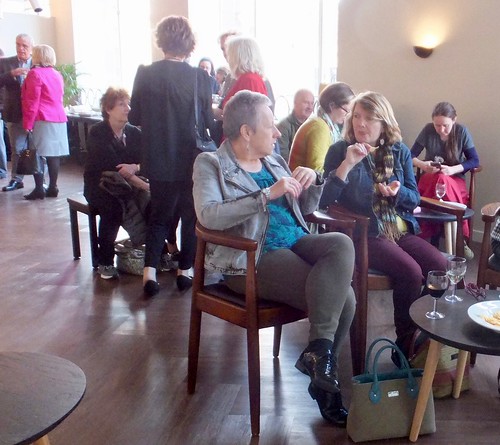 It seems the events area is a new thing for Waterstones, and it looked good. I think more bookshops should have rooms for this kind of thing. After an introduction, Theresa spoke a little about the background to her book, and then she read, from chapter one, and the bit where Rasputin dies. She also mentioned that someone in the room knew someone who knew someone who’d met the Tsar.

This probably wasn’t the rather young lady (granddaughter?) who ran up and hugged Theresa’s knees mid-read. But I imagine she might have found out that I favour the input from little ones at events like these, which could be why it seemed unfair to her when she was carried away again. 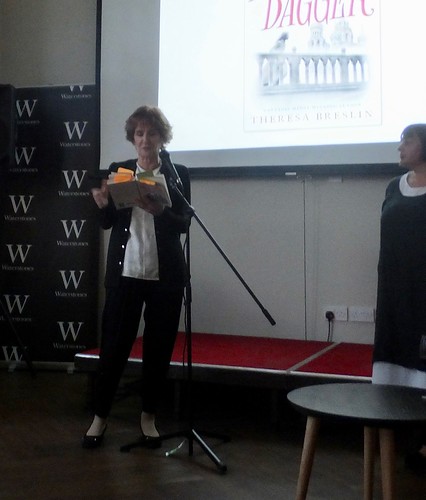 After chatting to the Waterstones host about the women’s demonstrations in Russia, Theresa mentioned their early right to vote, comparing this with Britain, and then they moved on to Argentina around fifteen years ago and the lack of food there, before we were invited to try the special cakes. 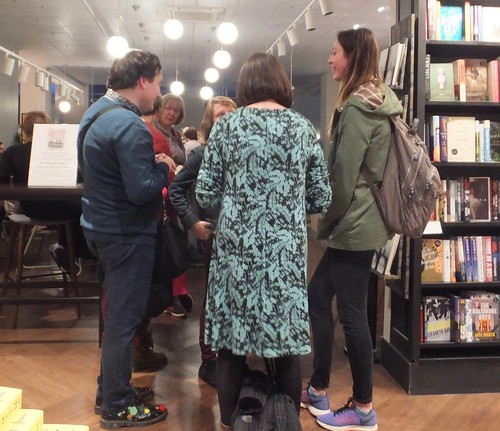 To avoid being stuck in Waterstones all night, I left just before the pumpkin struck eight, and because the trains are back to being difficult (what would we do if the trains ran properly??), Kirkie and I walked down Sauchiehall Street; he to a bus and me to the last train. Moira gave Alex a lift for the same reason, and then it seems Alex got on my train in Stirling as I got off…

4 responses to “Launching The Rasputin Dagger”