I knew there were going to be demonstrations. But I hadn’t quite realised the scale of things. Not until I saw a comment from a relative on Facebook that she wasn’t going into Gothenburg the following day (yesterday), because she didn’t fancy having paving stones thrown at her. 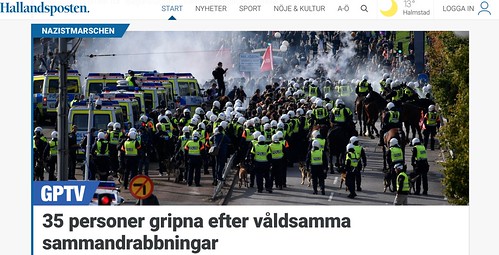 The Gothenburg book fair had already expressed unhappiness at the permitted route for a nazi march, which was going to be right next to the book fair. And then there were the counter-marches from anti-nazis, and more from organisations which I can’t understand why they would need to enter the fray.

Except it’s obviously ‘fun’ to make your feelings noticed. Apparently there were even foreign groups bussed in from elsewhere in the world.

Whether this can really be based on the few facts I have – which is that the book fair allowed a rightwing magazine to have a stand at the fair, which caused many authors to boycott – is something I don’t know. I don’t live in Sweden and I don’t have enough facts.

But as I said, people love to fight, and marches are one way to do so, especially if you stray from the permitted and approved route, which I gather is what happened. Police were called in from the whole country to deal with what was classed as a major disturbance. 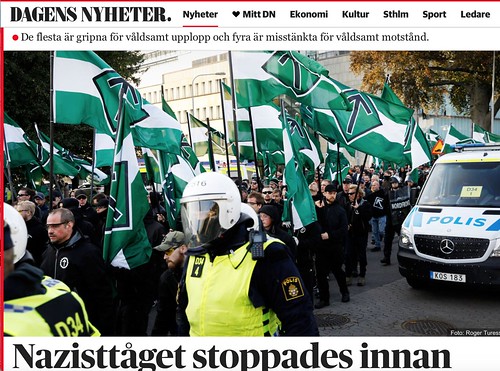 The side effects appear to have been fewer visitors at the book fair, and a seriously depleted audience at a football match down the road, despite them waiving the cost of the ticket.

Would I have attended the book fair if I’d been in Gothenburg? I strongly suspect not. I’m with my relative; I wouldn’t have wanted to risk it.

(I don’t lay claim to knowing precisely what happened and why, and I hope no one minds the screencaps from two newspapers being used. http://www.gp.se/nyheter/göteborg/våldsamma-sammandrabbningar-i-samband-med-nmr-demonstration-1.4683005)

This entry was posted in Authors, Blogs, Books and tagged Bok & Bibliotek. Bookmark the permalink.