My Side of the Diamond

Aliens. Inexplicable happenings, with more than a hint of Roswell. And it’s written by Sally Gardner. What more could you want?

This isn’t Sally’s first science fiction novel. It could be her best, but when I say that I don’t have the others in such fresh memory that I can swear to it. She is a woman who can tell stories. Yes, it’s sort of not original, but it is. I’ve not read anything like it. 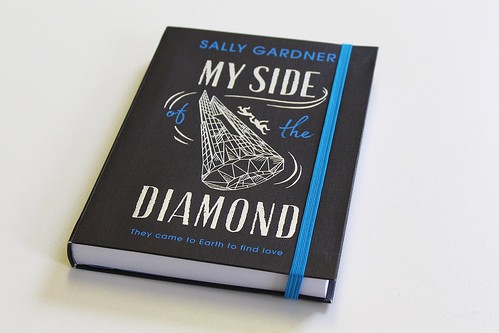 It’s short. I was almost worried Sally wouldn’t have time to reach the conclusion by the end, but of course she does. There are no wasted words. And it’s all so normal, too, apart from the abnormal, and the little futuristic view of London, which seems so likely when you think of it.

Weird stuff has happened. Jazmin’s best friend Becky jumped off a tall building and disappeared. She didn’t die. Or she probably didn’t. There was no body. But the authorities don’t like this kind of thing so it’s all blamed on Jazmin, the poor working-class girl.

Told mostly from Jazmin’s point of view – but occasionally by various other characters as and when their input is needed – she appears to be talking to someone about what happened. If there really is someone there? Maybe she’s gone crazy and sees things?

Absolutely wonderful, with likeable and sensible adults (well, there is the odd exception), and a genuine mystery as to what might have happened; both this time and the strange goings-on in the past. There’s not enough intelligent science fiction in YA, especially with romance.

5 responses to “My Side of the Diamond”