Thank god for authors like Derek Landy who change their minds! Resurrection is the tenth – of nine – books about Skulduggery Pleasant (not counting the extra book), and I am really grateful it’s here. I’d not understood how much you can miss a witty, and occasionally unrelieable, skeleton detective.

And here he is, back from where we left him, and well, I don’t know, but I can see more books where this one came from. I can, can’t I? Derek? 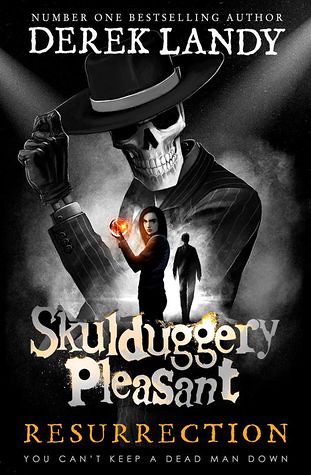 The best thing for people like me who don’t always remember where we left things, by which I mean who lived and who died and who was your friend, or who was your enemy, is that it doesn’t matter. Characters change allegiance faster than they do hats, and when the dead can rise again, death means very little.

Valkyrie isn’t feeling so good. Guilt does that to a person and being responsible for so many deaths – even by proxy – isn’t much fun. But hey, we have Skulduggery and we have a whole host of new young things, good ones and bad ones.

Omen Darkly is one of them. Aged 14, he lives in the shadow of his brother, who is the Chosen One. I reckon Omen is really Derek. And/or really me. I have a lot in common with poor Omen. Brave Omen. Except I wouldn’t be brave. As Valkyrie says, ‘The world is a scary place, and it’s only getting scarier. The American president is a narcissistic psychopath. Fascism, racism, misogyny and homophobia are all on the rise…’ And let’s not mention any more cheerful facts about our world just now.

Resurrection is a fantastic return to the magic Ireland we love. Please let there be more! After all, by reviving people, it’s not as if we are running out of characters. Trust no one.