Brilliant, but darker than Andy Mulligan’s other books, Dog is a heartwarming tale about a dog and his boy. Unlike some others, this one goes slightly more wrong when things go wrong, so I was fascinated to discover in the acknowledgements that Dog ’emerged after a more sombre novel had withered and died.’ I wonder what our usually so light and amusing Andy has been up to? 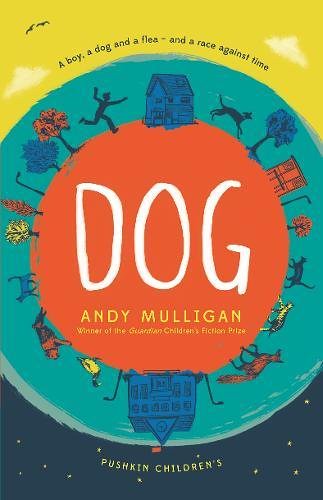 Dog is the last of the litter, not claimed by anyone, on account of him looking so weird. Which is why he only finds his boy when he’s actually given away for free. Money is a problem in Tom’s broken family, and when more things break, that means the problem gets worse. They can’t afford the mishaps that go with a puppy. A happy puppy, now that he’s found his Tom, but still rather accident-prone and someone who thinks after the deed.

This book deals with bullying; both Tom’s at school, and to some extent Dog’s (he’s called Spider…) at the hands of a spider, and a cat. It’s lucky that all the animals can talk to each other. Or maybe not. Spider believes the best of nearly every animal he meets. Who even knew fleas could be this lovely?

Finding this kind of love should be an encouragement to many readers – and their dogs – that life can improve. Both Tom and Spider make mistakes, as do the adults around them, but most problems can be sorted. Maybe not McKinley’s, though. That was rather a nightmare. As was the moth’s treatment by the spider (not the dog Spider!). It’s life. Or more appropriately, death.

This entry was posted in Authors, Books, Reading, Review and tagged Andy Mulligan. Bookmark the permalink.