Just the other day I suddenly realised I no longer ask my interview victims their opinion of Philip Pullman. I wonder when this happened?

Another thing that just struck me was that Son must have been reading La Belle Sauvage pretty much where he sat 18 years ago with Northern Lights, starting a whole new direction of his life with one book. That time we took the book for all of us to read on holiday. This time Son just happened to have planned a writing retreat in the same house, leaving Britain on the Day of Dust. Luckily he was able to buy the trade paperback at Gatwick, which must have saved his sanity, if not his writing time… (OK, the armchair no longer is, nor that end of the room. Well, the room is, but it has a dining table in the Northern Lights spot. But still. Close enough.)

And actually, only three of us read the book that time. Daughter didn’t read much back then. But Christmas the same year we took the audiobook to listen to in the car when driving to Scotland. It was just the right length to last the way there, and home again, with a chapter left. Only as Daughter grabbed the cassette (yes, it was that long ago) and sat down to listen to the end, did I understand that she had also been enjoying Philip Pullman reading Northern Lights. I thought she’d be too young at seven. 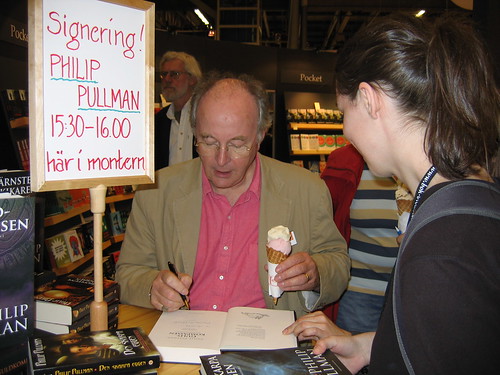 Six years later when Son and I interviewed Philip in Gothenburg, I got the impression he had started writing the Book of Dust. Two years after that, in Oxford, at an event with David Fickling, we were told it’d be ready in 2009, which was another two years later. Well, we know how that went. 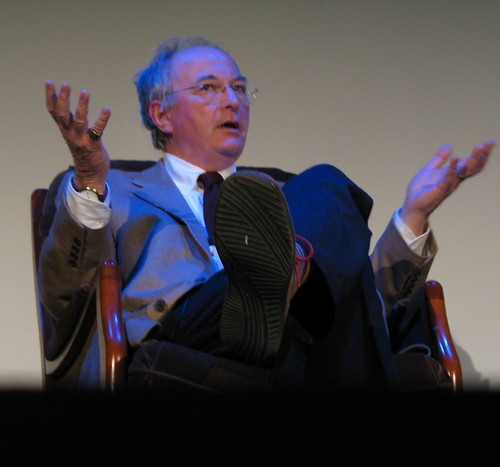 But, anyway, that’s how the questions about Philip Pullman began. We walked round the Gothenburg book fair, all excited about him, and Son took to asking anyone we spoke to what they thought. And as I said ten years ago (see above), all but one were nice and friendly and had positive comments to make.

The only one who stood out was Lionel Shriver, who claimed to have no idea who we were talking about. I’d like to think she just didn’t want to share any limelight with other authors, rather than she was that ignorant. I wonder if she’d still say ‘Who??’ if asked.

When Son no longer came along to my interviews, I went round asking for him. Until the time clearly came when I gave up, or forgot.

And no, I still haven’t read La Belle Sauvage. In my own time. Soon. I just have one or two other books that have to be fitted in first. But I brought a copy of it when visiting Daughter in Switzerland last week. No longer seven, she wanted to read it.