Just because you’re paranoid does not mean it is not out to get you.

Under normal circumstances 15-year-old Jack is a little crazy, and has a history of seeing things. So it doesn’t really help that as he and his dad are on the run from some bad guys, he witnesses a scarecrow eating a crow, and later he ends up talking to it. Him. The scarecrow. His name is Philbert. 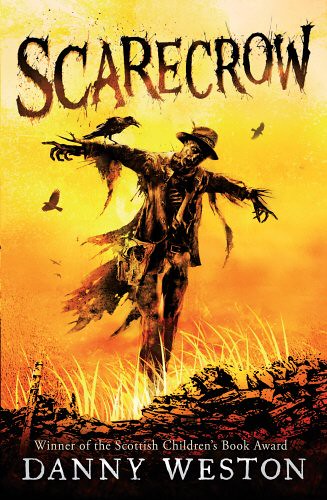 Jack’s dad is a recent whistle-blower who decides to flee his London home with Jack, as a way of staying safe. Bad idea. The Scottish countryside is not a safer place. Bad guys. Hungry scarecrows. That kind of thing.

And they’ve left their mobile phones at home. Just to be safe. Hah.

This is very good. I’m thinking it might be Danny Weston’s best, so far. Think Pimpernel Smith. (That’s a film.) Or that Christmas song about a snowman, as sung by Bing Crosby.

Anyway, Jack meets a girl called Rhona. Did you know they even have iPhones up there, near Pitlochry? Not so sure about finding a copy of the Guardian in the village shop, but there you are. Or rather, there they are. And how is anyone going to escape?

It was Rhona’s mother – who was a white witch –  who made Philbert. His task was to look after her family once she was gone. Because a pile of straw tied to a cross in a field can totally do that.

Did I mention that things get quite exciting after a bit? Well they do. And what’s that thing in the woods? Who can you trust?

Just so you know, witches rule.