George and the Blue Moon

Travelling to Mars has become quite a thing now, what with ‘normal’ and ‘ordinary’ people just about signing up for the first trip to our neighbouring planet. So not surprising that Lucy and Stephen Hawking’s George and Annie also get ready to go. 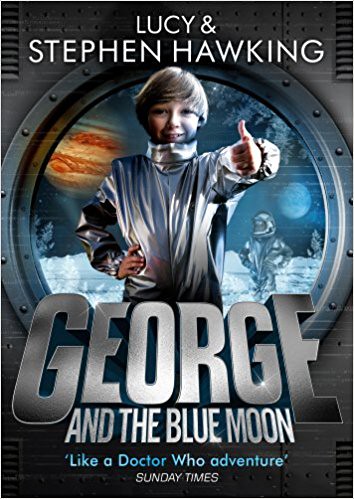 Except, it might have been described as a summer training camp for future trips to Mars, but in the end it seems that plans for the children who take part aren’t quite as they expected. But there would be no mystery and little excitement if we had no strange goings-on at space camp. And you can always have room for more bad guys, whether old enemies or new ones.

So while George and Annie make plans for the summer holidays, Annie’s dad is given the sack, and his computer Cosmos is facing tablet-status. What could be worse?

As usual in these books, Stephen and his colleagues from all over the world chip in with short ‘talks’ on their special subjects, and for the reader who can understand it all, lots of new worlds will be opening up to them. It is really tremendously educational and entertaining all at once.

The two children and their peers learn a lot about becoming astronauts and working together, making split-second decisions, and how to build stuff, and so on. And I know no other authors who could describe from personal experience, the feeling of zero-gravity in a ‘normal’ plane. If that’s not cool, I don’t know what is.

This is fiction, so maybe George, Annie and their new friends are slightly more capable or clever than children that age (11-12?) would be, but how inspiring they are! And maybe future trips to Mars isn’t all that’s going to happen. Cosmos’s portal is still going strong and you can always teleport, can’t you?

I’d been under the impression that this fifth book was going to be the last, but the ending was such that I had to contact Lucy immediately to ask if there is more.