On this tenth day of the tenth month in the tenth year of Bookwitch, I realise I’ve already been doing a lot of musing and looking back, and I keep telling you – even though no one asked for it – about all the good things the witchy work has brought me.

I appreciate all the comments you leave, offering some valuable thoughts that I have needed to hear.

There’s Fabio Geda’s smile when we met. I don’t tend to expect such reactions.

Can’t forget the Mars bar Terry Pratchett was hoping for when we first met, and I had nothing to offer him.

When we moved house, one of my goals in the house hunting was to find a garden like Candy Gourlay’s. Preferably with a house with similar vibes, too. It’s good to know what one wants.

I discovered that – occasionally – I can conduct interviews. This is an odd thing for someone quiet and unsociable.

Bookwitching led to some blogging for the Guardian. I’d never have thought that could be possible. I mean, not even Hallandsposten wanted me.

I now have pendant lamps in our newly built room inspired by the Edinburgh book festival’s lights in Charlotte Square.

There’s been a lot of interesting travelling, and some quite unusual event venues have been visited.

I was able to ask Derek Landy to leave a comment for a fervent fan who desperately wanted to hear from him.

And I’d like to think that my exploits have had a beneficial effect on the Bookwitch family. 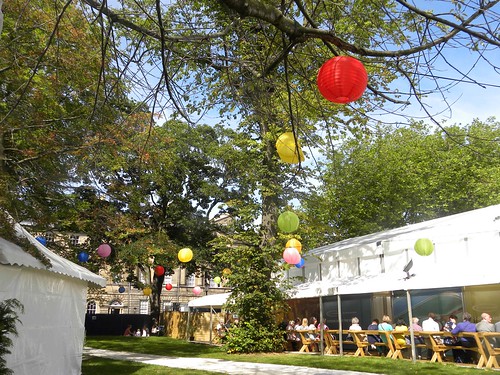 That’s it. Not very scientific.