Reading Catherine Simpson’s novel Truestory, which is about a woman with an autistic son, I felt as if I’d never read this kind of story from the point of view of the parent. I must be wrong, but it seemed very new, somehow. As though I was seeing the same thing, but differently.

This is an adult novel – and I don’t mean that to signify sex, although there is sex – and I don’t always want to read adult relationship stories. But I’m glad I read this one. 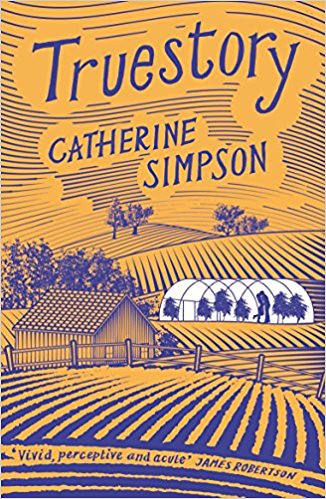 Alice and Duncan live on a failing farm near Lancaster. They have been married for 23 years, and have an 11-year-old son, Sam, who is autistic. Sam refuses to leave the farm, virtually imprisoning his mum because of this. The dad seems a bit lost, not remembering what will set Sam off, and also blaming Alice for how Sam turned out.

And then, as the latest in a row of mad schemes, Duncan brings home Larry, a man he met in the pub, who suggested he should grow cannabis. Alice is furious, but Sam takes to Larry, and after a bit, Alice rather does too.

If it wasn’t for the autism, this could be any ‘romantic’ triangle drama. You like Larry but despise him at the same time. Duncan is hopeless. Or is he? Will Alice manage to leave the farm, and can Sam ever become more ‘normal’?

You can sort of see where this will go, but there are many surprises on the way.

Just as I said after the event in November where Catherine talked, I can identify with so much of this.*

Because of Sam’s limited lifestyle, this is a drama with five characters – the fifth being the neighbour – plus the weird people poor Sam consults online about the meaning of everything he discovers.

This is quite Shakespearian in some respects. Funny. Sad. There is some hope.

*Not the cannabis. Or Larry.