29 years on, nearly there 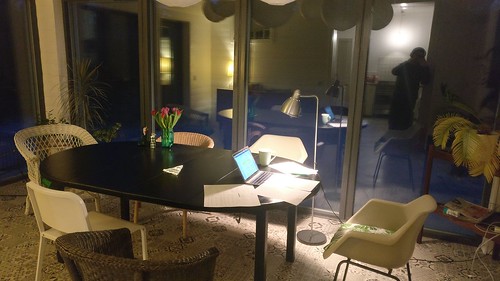 Woke too early yesterday, but saw the light – literally – from the dining room, so breakfasted while watching Son writing his thesis. Not all of it, obviously, but some of the bit of it that hadn’t got written the day before. Deadline is looming.

Over my yoghurt I was asked what I did on 23rd April 2000. I couldn’t remember, but said I’d not been invited to Shakespeare’s party, and suggested I might have been looking forward to Harry Potter no. 4. You need perspective.

Was also asked if I had a copy of Barry Forshaw’s Nordic Noir, but as I was trying to work out where I had hidden it, Son realised he’d already borrowed it and had left it at the office, which was not at all useful…

We talked about Marcel Berlins, and his fondness for the Famous Five, and about someone else I’d not even heard of. I’m flexible that way; don’t need to know what I am talking about.

I could recall when I first heard of Henning Mankell, and Son knew when the first translation into English appeared (surprisingly recently). I also knew roughly how ancient Maj Sjöwall must be and that Per Wahlöö had been older.

At some point Son was showing off his chapter pages, and Daughter admired the look until she found out it was in Word. Seems scientists don’t believe in Word.

Despite not wanting to upset Son’s proofreader with this tardiness, we all eventually took to the very snowy roads and went for brunch. There are times when I feel studded tyres would be quite welcome. This was one such time.

And despite it being intended as a [rare] weekend off, there was more thesis-ing between brunch and birthday cake and a Burns supper. Laziness must skip a generation every now and then.