And then I cried.

I was sad to get to the end of Michael Grant’s Front Lines trilogy, because now there is no more to read. But I was glad the war was finally over. Not everyone survived, because that’s the thing with wars; people don’t. 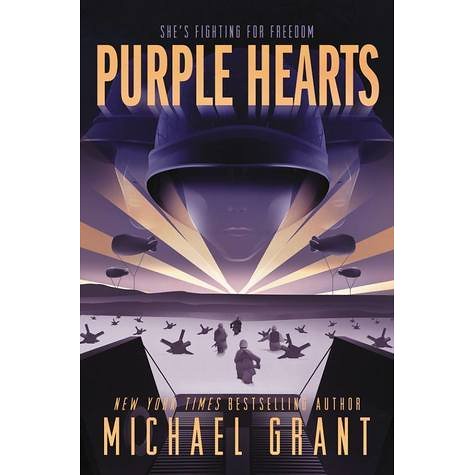 Purple Hearts, along with Front Lines and Silver Stars, will count among the best I’ve read. It’d be easy to dismiss this fast paced WWII trilogy as pure entertainment, but it is so much more. For a start, what makes it stand out is the use of women soldiers, alongside the men.

Michael makes a stand for equality, for men and women, for black and white, for ‘real’ Americans and for those others who fought by their side.

The Front Lines books teach us history. There was much I didn’t know. It’s given us rounded and interesting characters – I even grew fond of Private Sweetheart in the end – and it tells us how stupid, and evil, people have always been, and will continue to be, but that there is good in so many of us.

You have to care. And in order for us to care about those who had to die, Michael shows us, however briefly, what they are like. This way we mourn their deaths. Otherwise it’d be like it ended up being for those worn out GIs, who didn’t learn the names of new soldiers, on the grounds that they wouldn’t last long.

Starting in June 1944 we first fight on Omaha Beach. It didn’t take me long to realise Michael was making a detour via Oradour for one of our heroes. Mercifully it was quick (I have read a whole book about it), as was Malmedy (which I didn’t know about). And the concentration camps… Brief is almost better, with one major atrocity after another, the reader is with the GIs as the European continent is – slowly and painfully – conquered.

My guess as to which of the main characters was ‘writing’ all this down was correct. My hope for some of the more romantic elements worked out. We need hope.

I could go on. Purple Hearts is an inspiring read.

We could have done with women like these a long time ago.

And I [almost] blubbed over one name. Diane. It’s continuity like that which makes a story.

(The cover image is the American one. I prefer it, and as I read this as an ebook, there was no cover to call mine.)