I had an early e-version of this Gothic thriller, and I’d been describing to Helen how well it worked reading on the iPad. As I restarted, it sort of began scrolling the pages on its own. As I looked, I saw first a name, and soon after, a place. Both were familiar to me from what I’d been reading so far. ‘Damn,’ I thought. I didn’t want that to happen, and I didn’t want an accidental, electronic, spoiler.

But as I arrived at the end of Ghost, none of those things had appeared in the text, although something closely related to both had in fact happened. And as I got to the last line, there was a ghost of a flicker in my mind, reminding me of some other story. Except I can’t now think what, or even if. It was just rather ghost-like. 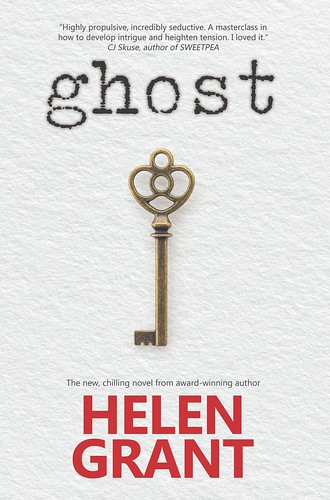 This is a beautifully written book. Not that I’d expect anything else from Helen Grant. It was hard to put down, and I did so as seldom as I could get away with. I wanted to bask in this quirky tale about the teenage Augusta – Ghost for short – who’d spent all her 17 years living with her grandmother, in secret, in a rambling but derelict house in Perthshire.

It’s a happy life, but frustrating and lonely, until the day Ghost’s grandmother goes shopping and never returns. And then 19-year-old Tom turns up. Both teenagers are equally shocked by the other, and together they have to try and make sense of Ghost’s strange existence.

Her quiet life in the Scottish countryside continues, while the reader waits for the bombshell that must surely come. What will it be, and when?

You’ll be surprised. At least I think you will be, if you have no unravelling pdf on your hands. Or, could it be that all copies of Ghost will have some kind of ghost inside? Not necessarily the same for all, but you know, some other-worldly hint.

Helen Grant is masterly at quietly worrying her readers.

I will – probably – be OK soon. I’m just not used to psychological thrillers.

One response to “Ghost”