‘Are you turning left?’ I asked, as my kind driver for the evening, Moira Mcpartlin, indicated. In the end we went right. And it went right, all the way to Perth, where Moira parked the car twice. I’d not had my walk for the day, so that was good. We even asked a policeman where we were. Or at least, where we were going. 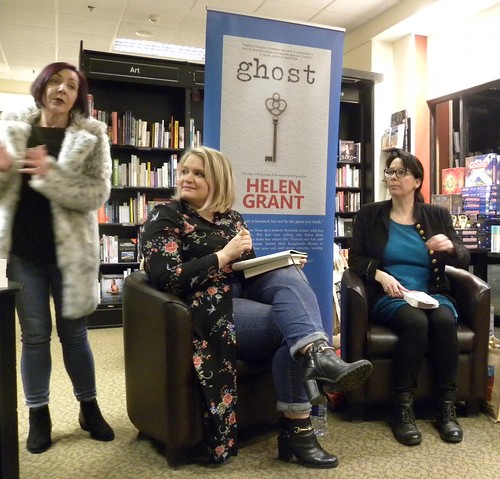 To Helen Grant’s launch for Ghost, in case you have been left wondering. Our host at Waterstones ran between unlocking the shops’s front door, to unstacking chairs, serving drinks and selling books. We provided advice as to whether we thought the banner for Ghost was likely to topple and hit the Helens as they talked.

Because you can’t have too many Helens. Last night it was Helen Lewis-McPhee who grilled Helen Grant on her ‘often dark and shadowy mind.’ After an intro-duction from publisher Clare Cain, Helen Grant read from her book, choosing the windowsill chapter early on, to avoid too many spoilers. 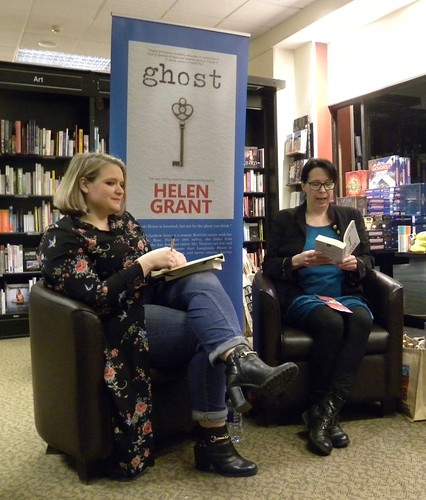 Ghost has been the worst book to write, taking first one year, and then another year to rewrite when Helen’s agent said she should. (Personally I have some strong words to say about that. But this is not the place.) As she put it when asked by someone in the audience, some of the changes were good, others merely made it different. And she’s now ready to write something really cheesy, for a change.

I’m not sure this ‘rather dark’ author does cheesy. Helen believes in ghosts in as much that she expects to run into some old, but dead, friends in the street one day.

She starts and ends her days by going on social media, but between that Helen feels it’s important to experience the day happening, maybe by visiting one of the many falling-down houses she enjoys so much, or other ruins. Helen often takes her son when exploring, whereas her husband is unable to ‘sneak around enough.’ She likes being alone out there, too, being quiet. 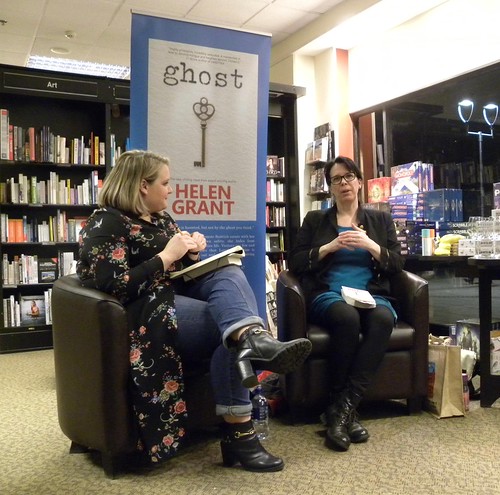 Asked what she’s working on now, Helen said it’s several different things as she can’t make her mind up. And she ‘cannot say anything briefly.’

Another question was about a sequel to Ghost. Probably not, but she admitted that certain things must happen after the ending to the current book, so… 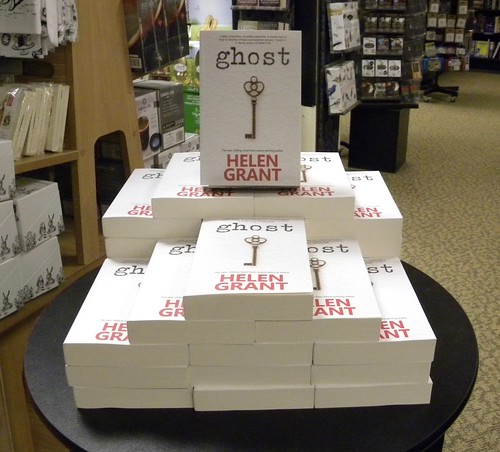 After all this people mingled and bought books and drank wine and were cultural. (I find Perth a little more grown-up than Stirling. Maybe I ought to go more often.) 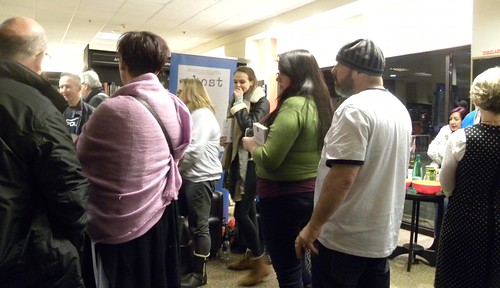 When my copy of the book had been signed, my driver walked us back to the car and drove us safely all the way home, and only once suggested I might be interested in taking up singing.