I was getting rid of more books the other evening. After weeks of staring at flats for sale online, and admiring how nearly all of the owners have managed to prune their belongings to a ridiculous extent for the estate agent’s photographer, I felt that I would quite like my home to look as though it was for sale. Even when it isn’t. The empty surfaces appealed to me.

Hence the books facing the chop. Some were easy and some were keepers. And then there was one, which I didn’t immediately recognise from the spine, so pulled it out to look at. It turned out to be a short story collection from almost five years ago. Written by already authors as well as hopefuls, with a connection to MMU’s writing school, I remembered them sending me the anthology. I kept it because it looked good, and then I moved house and it sort of disappeared, until I found it this week.

And that was a good thing. Had it been much earlier, the name Matt Killeen would not have meant anything to me. (If you look back to the beginning of this week, you’ll see his debut novel reviewed by your Bookwitch.) I had seen in the press release that he was an MMU alumnus. And here he was, hiding in ‘the gym’ which is where my intermediate reading material rests. 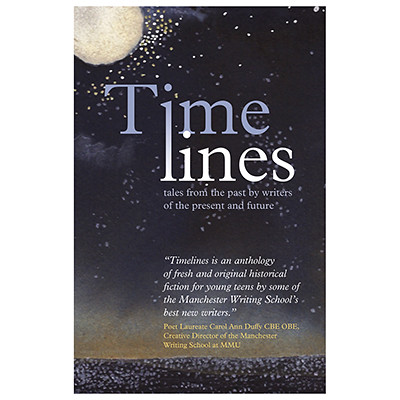 In Lucky Hits the Skin, we meet a young drummer boy in the army, during the [I think] Napoleonic wars. It’s short, but those ten pages are at least as good as the WWII novel Orphan Monster Spy. It’s nice to see that so many of the people who enrol in the writing schools at our universities show so much promise, and that they go on to be published, and hopefully madly successful. (Liz Kessler is one of MMU’s.)

Now that it’s out of the gym, so to speak, I’ll have a go at some of the other stories, too. Coincidence is a funny thing.