My heart is still beating. I mean, that is obviously good, but it did go thump thump thump rather a lot towards the end of Teri Terry’s Deception, the sequel to Contagion. This, too, ends with, if not exactly a cliffhanger, then with lots of questions left unanswered. And there has been much deception, and probably will be even more in the last instalment. 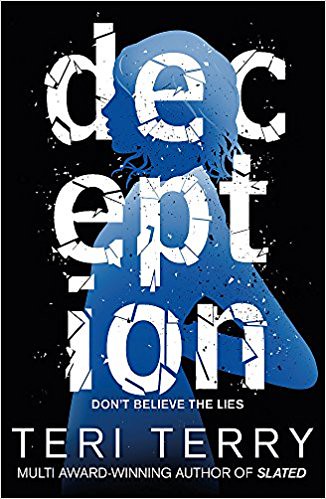 More people die. Lots more. So if this was real, I’d definitely be dead. And as in Contagion, Teri kills both good characters and bad ones.

The disease keeps spreading. The carrier knows it’s their doing, but for a long time no one else realises who’s the guilty party.

We gain a few more major characters, because all this couldn’t be left to Shay and Kai and Callie to sort out. Some of them die. Some don’t. Not necessarily the right ones. But I quite like the set-up over dinner one night when one character demands of another that she teaches them to kill. ‘Show us again,’ … ‘If anyone comes around with a flame-thrower I want to be sure how to do it.’

The bad guy has become more obvious in Deception. Unless he’s merely misunderstood, of course. But I don’t think so. And while believing that we all have some good and some bad in us, I’m not counting on this one rescuing us all in the end.

There is deception in most of us too. We don’t always admit to everything, and sometimes we deceive. Intentionally. All is fair in love and war?

If you want a dystopic thriller, Teri Terry is your woman.