Black holes and other fun

The image of Stephen Hawking, who died yesterday, that generally comes to [my] mind when I think of him, is the happy one of him floating weightlessly inside one of those planes where you can simulate being in space. It tells you that this was a man who was up for fun, and not someone always weighted down by his reputation in science or the fact that he’s very famous, or even as ‘someone in a wheelchair.’

In other words, Stephen was a role model to lots of people, in many different ways.

If you only encountered him as the ‘Stephen’ who writes about science in his daughter Lucy Hawking’s books about George, you’d probably think he sounded like an OK guy. Not old, not filled with his own importance. And if you’re ten, which you could well be as a reader of the George books, that might be the only thing you know about him.

But he did get to grow fairly old. All right, 76 isn’t that old, but to outlive a life expectancy of a couple of years by another fifty is pretty good going. And I admired his public – and political – stance on what the government is doing to the NHS. It needs people of some importance to speak out, because the rest of us don’t seem to count. And as a user of the NHS, Stephen had more of a track record than many of us.

It’s also heartening to know that a man considered to be so brilliant now, was seen as more average or mediocre when he was young. That, if anything, is a sign that you can pull yourself together, and that you can turn into someone who inspired many young scientists, my own little one included. Nine years ago in Edinburgh Lucy Hawking shared an early opinion (school report, maybe?) on her father, just after he had received the Medal of Freedom from President Obama. ‘This boy will never amount to anything.’

I have no idea how close to the truth the Eddie Redmayne film The Theory of Everything came, but in it you will see some of that playfulness. On Wednesday’s Today programme John Humphrys seemed taken aback at the idea that Stephen Hawking might have danced in his wheelchair.

I don’t see why not. Just because you can’t walk doesn’t mean you have to be boring. Or not want to dance. 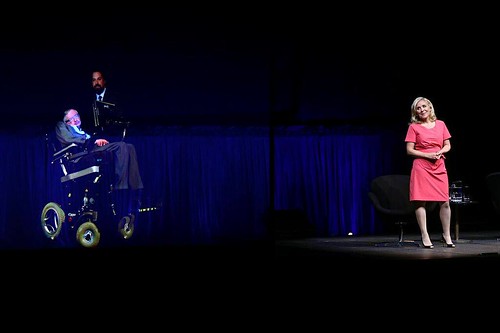 (I borrowed the above photo from Lucy. It’s such a great illustration of how she travelled the world on her father’s behalf, even if he turned into a hologram on occasion.)