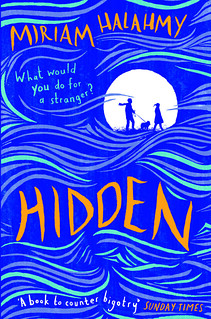 I read and reviewed Miriam Halahmy’s book Hidden seven years ago. How time passes. Unfortunately not a lot has got any better, and the topic is as current as ever. More so. I don’t reckon any of us who felt bad about what things were like then, ever dreamed that it would soon feel much worse.

Below is my review from April 2011, to celebrate that a new edition of Hidden is published today. Today is May 1st, International Workers’ Day. We have much to march for, but perhaps not much hope for improvement or the fair treatment of everyone, least of all refugees and other immigrants.

They come here and take our jobs.

But far too many people believe this about foreigners, and especially about refugees. It’s time to get the message across why people flee their own country and come here (or anywhere else).

Miriam Halahmy’s new novel Hidden is all about the plight of refugees, and especially those who have been denied the right to stay, because they somehow don’t fulfil the strict criteria for permission to remain in Britain.

It’s as if people would want nothing more than to come to a place where they don’t belong, where they don’t know anyone and where ‘everyone’ hates them. I mean, who wouldn’t love to move somewhere like that?

Alix accidentally befriends Samir in her class from school, and equally accidentally the two of them end up rescuing a refugee from Iraq, which is where Samir came from several years before. They need to hide him and they need to make sure he doesn’t fall ill and die from his injuries. All because he’s illegal and Britain doesn’t want people like him.

Samir has problems of his own, and so does Alix, who lives with her mum after her dad left and her granddad died. In their class at school they also have the sister of the local hooligan, and they need to steer clear of both her and her terrible brother.

Until she came across this Iraqi man, Alix had always assumed her friends and family and neighbours felt the same about immigrants and refugees as she does. Now she realises she has no idea who is on her side, and it comes as a surprise to find that not all are as she’d expect.

Hidden is a great story about a very real and current problem. It shows the reader precisely why refugees come here, and it’s not for the hospitality. You come because there is no alternative. And there are good and bad people everywhere.

As Nicholas Tucker says in his review, this is a book that ‘deserves the widest audience’.

This entry was posted in Authors, Blogs, Books, Review and tagged Miriam Halahmy. Bookmark the permalink.