Five from my childhood

A recent meme on social media to put up cover images of your favourite books had me doing absolutely nothing. Nothing, except looking to see what people would put there. It was interesting. Illuminating, might be a better word.

I assume that the actual cover images they used were of the particular edition they had read and liked, many years ago. It made me think about how important that first cover is; the one where you discovered something new and wonderful.

I wonder if you could do that, but hate the cover? I don’t know. Thank you, H Baldorf Berg for giving life to my early adventures. Nothing out there beats them. 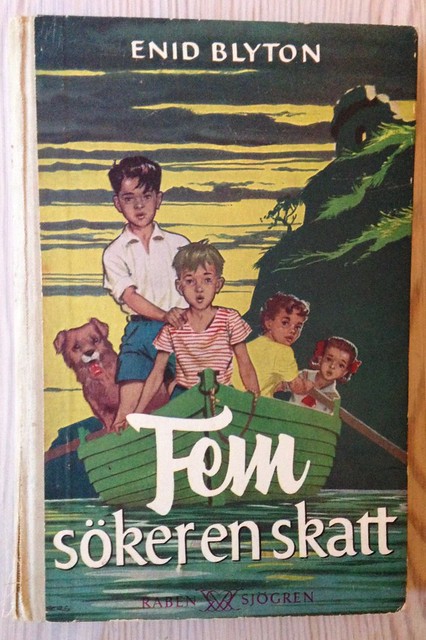 I know I loved discovering Fem söker en skatt, aka Five on a Treasure Island, by Enid Blyton. Despite me starting with the film, I was nevertheless enchanted by the cover of the book Mother-of-witch let me have soon after.

They were too expensive for me to buy, at the age of seven. I suspect that after the first one, I only got more Blytons for birthdays and Christmas. And we borrowed from each other at school.

The cloth spine is rather frayed, and the colour has faded much more than the other books in the same style, presumably indicating I not only read this one almost to pieces, but that it had a head start in the bleaching process.

It cost five kronor 50 öre, which was a lot for a child who received one krona pocket money per week. But I reckon Mother-of-witch got her investment back, because where would I be today without that first book? 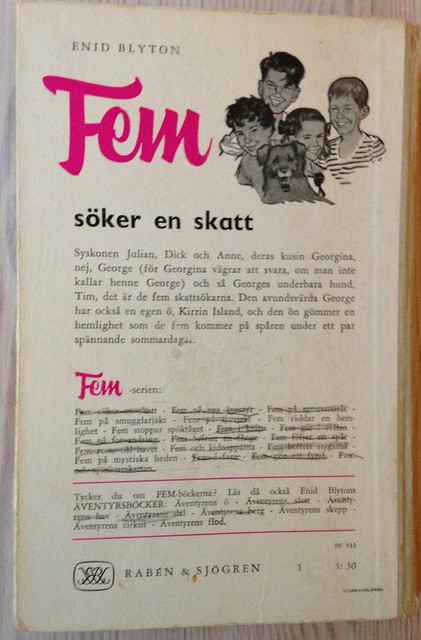 I own maybe five of the Five books, plus a few of the other series. As you can see, I crossed off the books as I read them. I must have felt it was OK to do this. And even though it looks like I didn’t read all the books, it’s more likely I stopped crossing the titles out on the backs of my books at some point.

I read them all.

2 responses to “Five from my childhood”