Aquarius. Reading about this ship, full of people who have left their homes and countries, and that turned out not to be welcome anywhere, until it was finally permitted to land in Spain. It’s an appalling situation, and one which reminded me of a book I’ve mentioned here several times. I’ve just not gone into detail, or reviewed it, because it’s not available in English, and now I suspect it never will be.

It is Lisa Tetzner’s Das Schiff ohne Hafen, or Skepp utan hamn, in Swedish. Ship with no harbour. Part of a series of books about the children of a tenement in 1930s Berlin, Mirjam and her aunt Mathilde have travelled through western Europe to join a ship that will take them to a new life in South America. They are Jewish, so know they need to leave Europe.

The Garibaldi is not a regular passenger ship, but is now full of paying, desperate people, hoping to escape. There are all sorts of passengers, from the wealthy and successful to the destitute, who have already suffered greatly. The children on board make friends with each other, as far as they can, due to class differences and personality. 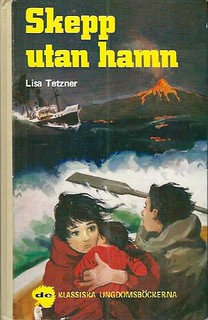 The journey is eventful in various ways, but it’s not until they reach Brazil that it becomes obvious that things are not going to end well. There is illness on board, which means the ship is not given permission to land in some places. And where they do get to land, immigration officials are strict and refuse to accept many of them, sometimes because their papers aren’t ‘in order.’ Or they are ‘too old,’ or the single women ‘too single.’

The reasons given are the same we hear today for today’s unwanted. So the ship sails on, along the coast, with a few passengers allowed to enter their new home countries, but the rest have to stay and the ship gets all the way round to Peru before disaster strikes, and only a few of the children make it out alive, [conveniently] finding a desert island [where, in the next book, they try to live and survive].

Rich or poor, no one escaped this fate, and they have to make the best of things. Because this is a series of books shaped by WWII, there is much that is bad in them. But because the series ends after the war, Lisa Tetzner also lets there be much hope and friendship and belief in a new future for all. The last book is an inspiration, like a miniature United Nations.

Now, of course, we know a bit more about that as well. But when I first read it, my heart swelled with happiness and pride.

Just goes to show how the world works. If I’d written more about this series earlier, it would have been possible to still believe. I left it, hoping that someone, somewhere, would translate and publish the books. I also stupidly believed in a basic level of decency among people. Well, it exists, but the waves of hating your neighbour seem to be a necessary evil too.