Who’s going to take the books away? That’s what I’d like to know.

We’re on holiday, but as the Resident IT Consultant tackled the wilderness ‘garden’ I tackled the books. I am a Bookwitch, after all. I’d been going soft and allowing all kinds of books to remain. But being realistic, how many potential readers of a dozen or so volumes of Swedish poetry am I likely to find around here? 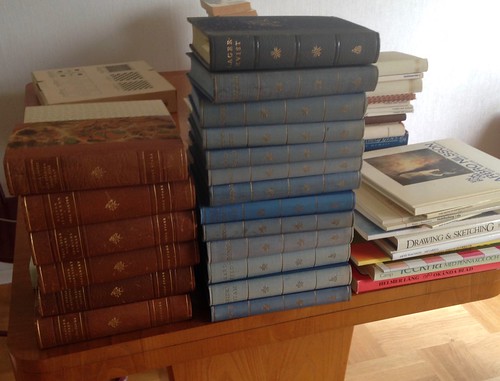 But I looked at all the books, and found some of the old dears looking quite promising in one way or another. So they stayed. As did both versions of David Copperfield. But more of him later.

Yes, that is a copy of Don Quijote, below. I asked the Resident IT Consultant, whom I consulted, if that was right. Apparently it’s not a very good translation. And we clearly don’t want that. 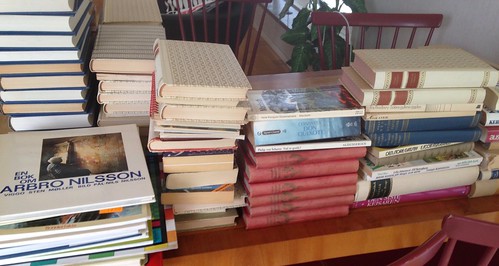 Then I liberated the children’s books from near the bed and by doing so freed an awful lot of dust. You wouldn’t believe how much dust there was. Even if you are good at collecting the grey fluffy stuff, it will be nothing compared to what I’d inadvertently done.

The amalgamated books allowed to remain look reasonably neat now. There is room for more to join them, or for – small – knick-knacks. Except I don’t do that kind of ‘styling.’ There are two pairs of binoculars, however.

I’ve put the going-away books in five large paper carrier bags. I trust if I think positive thoughts that they will depart under their own steam. Somehow.