The Word for World is Forest

I have at long last read my first Ursula Le Guin. It was the novella The Word for World is Forest, and it was in translation, arriving as it did from a friend’s garage, where it had also been a bit unexpected.

It was all right. The sentiments are ones I obviously identify with. Don’t use violence. Don’t burst in on someone else’s world and start telling them what they must do, enslaving them in the process. First published in the early 1970s, it’s clear where this was coming from. 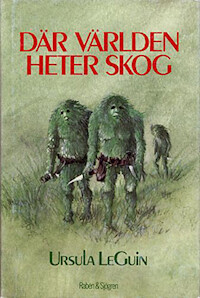 But I didn’t enjoy it. Not really. I suspect my garage-owning friend felt much the same, but we both had a curiosity that needed satisfying. Like why had we not read Ursula’s books when we were young? And why had we not even heard of her?

The trouble is, I was under the impression this was a children’s book, due to its size and design. I stopped believing it was for children after about a page. But it still looked like a children’s book. At least this translated version did.

Basically it is about a faraway planet invaded by Earth, and where the hitherto peaceful inhabitants are forced to become cruel and violent like the invaders in order to get rid of them, which mostly involves a lot of killing.

I think I would have liked to see ideas like these executed with a bit more thought through science fiction elements.

One response to “The Word for World is Forest”