We talked about animals the other day, the Resident IT Consultant and I. You know, spiders, possibly fierce dogs, cows. That sort of thing.

We all ‘know’ little Fido is not dangerous. Won’t bite. Until he does and everyone is surprised. Some of us don’t mind spiders. Others go berserk at the thought of them. The Resident IT Consultant mentioned how a recent cow incident on a walk in Fife had changed his opinion on how not dangerous cows are. 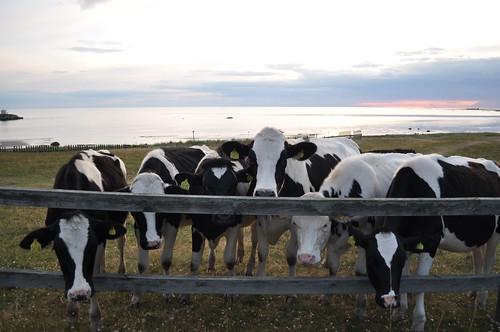 I changed mine a lot earlier. After a long life of co-exisiting with cows on Swedish beaches, it took a turn for the worse in 2000, when not even being in the company of a vet [on the beach] made the sudden proximity to what really is a large animal, improve.

We returned last week from nearly three weeks away. Luckily Aunt Ochiltree had kept an eye on the incoming books, so the situation was not chaotic. There were, however, several post office cards of the ‘we missed you’ kind. The Resident IT Consultant dutifully went off to collect the parcels at the sorting office.

And it’s only now we’ve read in the weekly local newspaper that hours later, a postman was savaged by an angry cow. In the sorting office.

Narrow escape that was.

This entry was posted in Blogs, Books. Bookmark the permalink.